In my last post I outlined the races available for play in my home setting of the Last World. I received some negative feedback about two of the choices being uplifted animals. The derogative "furries" was tossed around a bit as well.

The two types are important to the setting background as they demonstrate the decline of the kobolds' biomancy. They are the last, stable servant-races created by the kobolds. They are also, rather poor genetic constructions that are nothing more than well-done hybrids. The first servant races the kobolds of the Last World created out of their enemies' genetic potential were completely new creatures that bore so little resemblance to the original gene seed that no one would ever have guessed the truth of their origins.

I had originally included the Ferl as NPC monster types but when I was looking at my list of playable races I realised I had no big-strong-hit-things type. I included the Ferl to cover off that spot. Fortunately for me the solution to the Ferl is a simple one. I just dip into the weird monster list of the Last World and find something that is playable. Here is something different for your 5e D&D game.

The Greenwalkers are not a race, so much as a growth stage of the trees that make up the Bloodwood Groves. Bloodwood Groves are groups of trees from a small copse to a forest. In times of drought or emergency they can uproot themselves and move. They split their lower trunks into two or three "legs" and batter their opponents with their branches. Once their foes are killed or knocked prone they will extend roots into the bodies of the fallen and drain all the blood from them. They can move the forest and sometimes hunt by hiking trails and roads, forcing travellers into unending circles where they are hopelessly lost. After that, it's just a matter of waiting for them to make camp. The Bloodwood don't move much or often because it is taxing for them. They mostly stay stationary and push their roots deep so they can enjoy the stillness and share stories with the others in the Bloodwood. They tend to be most dangerous during droughts, floods or forest fires which require them to move great distances. For this they will need to consume a lot of nutrients (blood) from wandering meat-things. 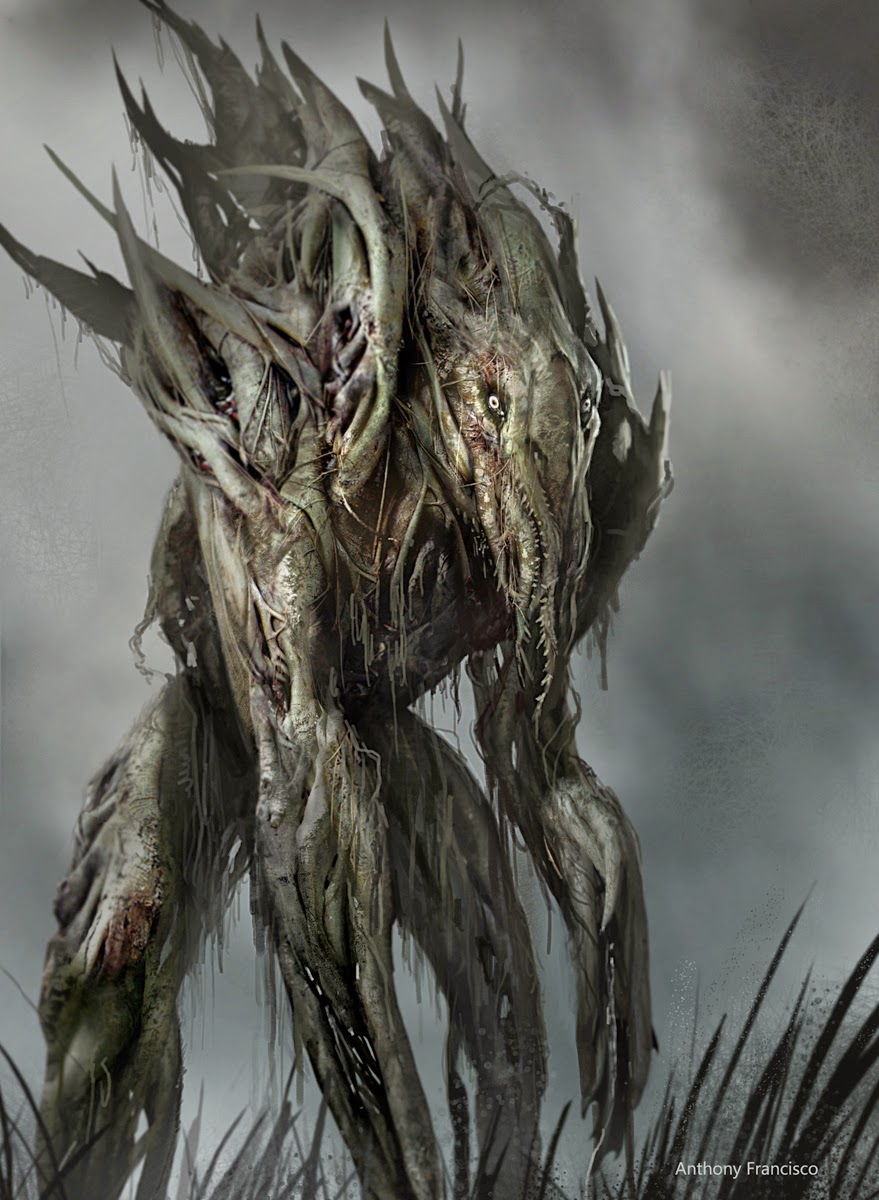 There comes a time in the life of every tree in the Bloodwood Groves where its sap runs fast through its limbs, it loses its leaves in a shower of colours and its bark turns from a rough, hard brown to a thin and supple green. Its lower trunk will split into leg-like appendages and its roots will retract into them. These fast-movers are known as the greenwalkers and they leave the safety of the grove to interact with the fast-world of the meat-things and learn what they can before returning with the stories that will add to the knowledge and experience of the Bloodwood.

They feed with the retractable roots in their lower trunks. All they do is stand on a fresh corpse, extend their roots into it and draw in the blood to be processed into sap. It takes 4-6 hours to complete on a medium-sized creature and counts as a long rest. To get the effects of a long rest without feeding on blood a greenwalker must extend roots into fertile soil and stand in the sun for 5-8 hours. Regardless, they cannot go without blood for more than a week without suffering from the effects of starvation.

A greenwalker's trunk will be split into two to four leg-like appendages (player's choice), although three is the most common. They have between one and three larger, powerful limbs used for lifting and fighting (again the total is up to the player), but two is normal. They have any number of smaller, thin limbs for fine manipulation spread about their trunk and some will even have a couple on each of the larger limbs. Despite all these limbs, the thought of a tree can only move so fast and they only have the attention to take one action per round like any of the humanoid races.

When planted, Bloodwood trees and Greenwalkers can get a sense of where everything standing/moving within 60 feet of them is. Bloodwood can get even more information from the air using their leaves. These are not practical senses for the fast pace of the meat-word. The greenwalkers all have a series of eye-stocks usually growing to cover all around near the top of their trunk. They are protected by green, petal-like lids and look like green balls at the end of thick, 6-to-18-inch-long stems. They see light in much the same way as humans and other humanoid creatures do. They can see all around them but usually only open enough eyes for a single field of view since processing images from all around is trying.

All bloodwood communicate with each other using a limited form of telepathy. To speak to meat-things they have grown thin strips under their bark that they can vibrate in various combinations to approximate most humanoid speech, although it sounds like a group of people saying parts of the words together. This can be disconcerting to humanoids the first time they hear it.

Greenwalkers have no mouths, noses or faces. Sometimes for the comfort of their humanoid companions a greenwalker will paint a face on its trunk or fix a mask to it. This practice is as creepy as it sounds.

A greenwalker's growth is slower than a rooted Bloodwood because it is spending so much energy on movement and it will take nearly 80 years for it to grow a mere 12 inches in height.

With so much extra liquid in their green limbs greenwalkers are no more susceptible to fire or burning than any humanoid.

Age: Depending on the growing seasons where it was rooted for its formative years a greenwalker can be anywhere from 60-110 years at the beginning of its travels. Once they grow into large creatures it begins to take too much blood to keep them supple enough for every-day movement and they will retire to a grove or seed one of their own after 70-120 years of adventuring.

Sex: Greenwalkers are not mature and are expending too much energy to keep up with the meat-world to produce pollen or seed-pods. Once they are rooted again all Bloodwood release both seeds and pollen.

Size: Greenwalkers are tall, standing well over six feet in height. Their trunks are far more dense than an average humanoid body of the same height and weight anywhere from 250-350 pounds. They are medium creatures.

Speed: Base walking speed is 30 feet.

Made of Wood: Have advantage on saving throws against charm, poison and fear. They cannot be put to sleep. They are quite buoyant and have advantage on rolls to swim on the surface of water but have disadvantage when trying to dive under unless weighed down.

Unarmed Attack: Greenwalkers can club with their large limbs for 1d4 bludgeoning damage but this sort of attack is painful. They generally prefer to use weapons produced for humanoids, which they can use with ease.

Tough: Greenwalkers have a base armour class of 12. They can only use armour which has been customized or created for their specific, individual use.

Fast Healers: Provided they can feed on at least a small creature, they heal one extra hit die on a short rest. They can grow back lost limbs and eye-stocks in 1d6 weeks and require an extra medium sized creature's blood for each week on top of normal daily feeding to complete each week's growth.

Can't See the Trees for the Forest: Greenwalkers can attempt to hide even if lightly obscured by natural phenomena such as light foliage, mist and heavy rain. They have advantage on stealth rolls when they need to be still to remain unnoticed. They are naturally good at being still.

No Bandages for Wounded Trees: Traditional healing does not work on a greenwalker. Healing potions applied directly to wounds will work provided the greenwalker makes a constitution saving throw. Magical healing works as normal.

Languages: A greenwalker can speak any two languages.

Equipment: A greenwalker gains its initial equipment from former greenwalkers who have rooted themselves, offerings made to the grove by travellers and the humanoid victims of the grove. They start with no currency. Any equipment that doesn't make sense (rations, blankets, etc) are not recorded on the character sheet and no monetary value is given for these missing items. This process accounts for the scrounged nature of their initial adventuring gear.

That is the greenwalkers in a nutshell. Something a little different to fill out the party heavyweight position. They'd make a mean rogue too. No one wants to admit they were back-stabbed by a tree!

NOTE: I've since tested this PC race out in play on multiple occasions. From what I saw, the best class fit was barbarian. In practice the special healing positives and negatives balanced out well. The ability to sense the approach of things travelling by ground when rooted made long rests a little safer, but not in a way that broke the game. The party using the floaty character as a life raft in one instance was kind of hilarious.