The idea of Wonder verses Weird is one I've struggled with for a long time.

Kiel Chenier of Dungeons and Donuts fame started a thread on G+ back in March of 2015. He was talking about how the OSR seems to be caught up in the pursuit of the weird. According to his post old school gaming seems to be reaching toward more uncomfortable material and going for the ick factor while chasing the weird. What he's looking for from a gaming experience is wonder. The feeling of being taken aback by a scene and momentarily stopped by awe.

Wonder is a great thing to aim for in gaming but it's much harder to achieve than weird. I'd say the two of them are solutions to the same problem with most fantasy RPG material.

The majority of fantasy RPG material made in the last 40 years is based on the tolkienesque assumed setting of Dungeons and Dragons. There are certainly exceptions, but most fantasy games have the humans, elves, dwarves and halflings defending civilization against the evil creatures like orcs and dragons. These games influenced and inspired writers in the fantasy genre, entrenching these assumptions as "traditional fantasy" in RPGs and all kinds of other media like books, films and video games.

This common ground certainly makes entry into the hobby a bit easier since there is so much less explanation required. An introduction can be as short as saying the game is just like whatever movie, TV show or video game the person is familiar with that makes use of the common fantasy tropes and that's it. One sentence explanation. That easy summary has it's advantages, but it saps a lot of the wonder that comes from exploring something completely new. 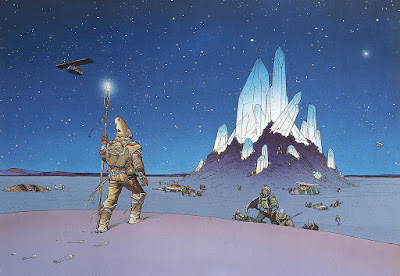 That's not to say there was never wonder in D&D. I can remember opening up my Mentzer Red Box in total amazement at the scenes and creatures inside. I've seen that same look of wonder when I used the old Basic and Expert books to see if my daughters would want to play an RPG. They were blown away by what they saw and excited to explore the new world it showed them. The points of light in the "known world" setting worked well in terms of developing that sense of wonder as well. Civilization was in small pockets, slowly expanding into a wilderness full of monsters, ancient secrets and wild wonders. It's important to note that when I first encountered D&D I had not read any tolkien or his imitators. My exposure to fantasy by that point was small. Mostly books by Ursula K LeGuin and "historical" fiction with fantastic elements. I also read every Greek, Norse or Celtic myth and legend I could get my hands on. The only fantasy films I'd seen were Excalibur and Legend. When it came to D&D I took it all in like I was starving. Soaking up the elements of  Vance, Leiber, Moorcock and even Tolkien with all the wonder my ten-year-old brain could muster.

I started this post while musing about introducing a couple of brand new players to the RPG hobby and dealing with the pretty serious problem when it comes to wonder. As uber-geeks who have consumed all the fantasy and sci-fi pop-culture can provide there is little in the D&D multiverse that they haven't been exposed to at least in some part before. They had their players' handbooks and they'd read them cover-to-cover. The game itself held a sense of wonder in that it was a new experience and they have nothing on which to base expectations. They knew it has rules so they can count on it being something, but they can't know what that something is until they've tried it out and become familiar with it. If role playing is the novelty then they are likely to jump from campaign to campaign, and game to game and ultimately system to system looking for that feeling again. We played for the better part of a year before life got in the way. There was wonder as they explored the world and tried different things. The fact there was no edge to the map, that adventure could be found almost anywhere as long as they interacted with the world it would present endless possibilities to explore. 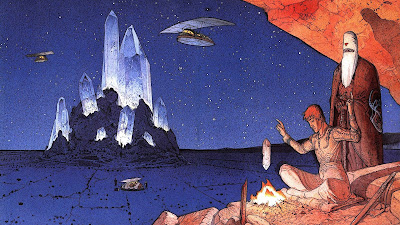 When I started playing D&D, and when I start any new campaign, the wonder comes from the world itself. A world with its own set of rules can hold its own wonder. Learning those rules, exploring the world for more surprises can provide all kinds of fun. But the more the world conforms to expectations, the more the players need to delve into the edges and dark corners to find something new, something that has its own set of rules.

That's how games like Call of Cthulhu and Lamentations of the Flame Princess build the impact of the adventures. They don't even try to provide wonder in the setting. They've given up that fight as unwinnable and built their world into the shadows of the one we have here. That's the foundation of the weird. It disrupts expectations instead of creating new ones. It changes and tears at the rules and assumptions. It also tends to be terrible in some way. The weird revels in the tension it creates but it needs the mundane as a contrast. Tension needs the norm to pull against. 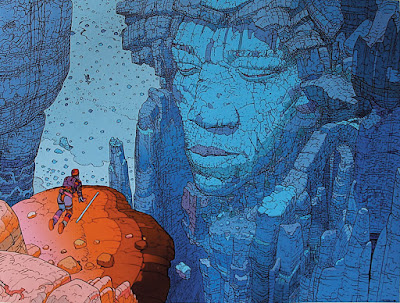 Wonder is something different. It doesn't need to be grounded because it does't rely on tension. Wonder inspires awe. Lovecraft did it with his Cyclopean columns in the ancient ruins of unknowable peoples. Carroll did it with the dream-time logic of Wonderland. Fantasy and sci-fi has always had graceful or delicate towers reaching into the sky and strange people with customs that need to be unravelled to be understood.

Goblins, orcs and elves present little mystery these days. Even the fresh takes on the old themes are grounded in the common expectations surrounding these common fantasy creatures. How do I inject wonder into these common themes without disrupting them so completely they become weird? Does the audience matter? How much do I add to the basic framework of goblins and kobolds for my new players? Am I merely creating uncommon expectations they will attach to familiar names only to have them disrupted by their next group? Is that even fair? It's probably not necessary to change things dramatically to get that burst of wonder. No matter how the world is set up the players will figure out its mysteries and make it "normal" for them.

I've also been running games for my kids and their friends with the Black Hack. They don't know the rules and have zero expectations. They are developing them as they interact with the world and explore. Wonder is easy as each new thing is amazing. I could leave everything bog standard D&D and they would eat it all up, but I've made changes. These things, like goblins hatching from a queen's eggs fully grown, they accept as part of D&D. No matter what they read in rulebooks later, goblins will have queens and their nests will be an HR Geiger nightmare with a bloated queen and egg pods everywhere. Those changes are for me, not them. 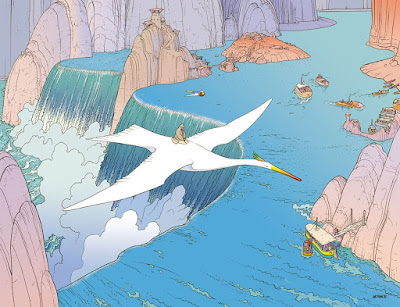 For someone new to tabletop gaming the smallest brush against a fantasy trope can create wonder. I rolled an encounter for them at night and had a dragon fly over their camp. They didn't fight it. Their characters couldn't even see it. It was a silhouette revealed by the stars it blotted out above, but it blew their minds to be so close to a dragon! They talked about it for months as that time they saw the dragon with the wonder written all over their faces!

For adults, wonder seems easier for something like science fiction. Planetary romance or space opera can move from planet to planet. Each new planetfall brings a fresh world with its own set of rules and consistencies that need not relate to any other the characters have visited before. Even hybrids like Vance's Dying Earth where the long past of the Earth lays shadows on the world so that any location could be out of sync with the campaign would the characters already know. I think that is the draw of games like Traveller or even the Planescape and Spelljammer settings of D&D. The perpetual need to explore, to figure out the rules of the current locale and the wonder they present. 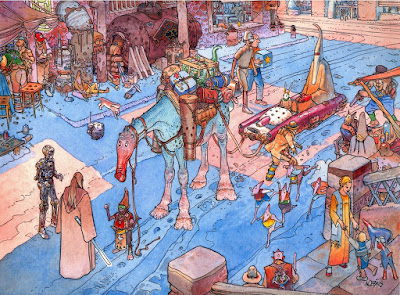 Many of the small press fantasy creators focussed on the disruptive and weird in the past few years, but it's the stuff that captures a sense of wonder as well that seems to gain the most traction and be talked about in the most glowing terms. I think when people use words like "original" and "different," they are really talking about the sense of wonder they found reading or playing it.

The little products that snag ENnies and get talked about with such passion online are the ones that present worlds with new rules that create a whole new set of expectations through play. A few examples that spring to mind are A Red and Pleasant Land, Yoon Suin, and Veins of the Earth. All three of these present new worlds. The two LotFP releases straddle the weird by having entrances to the real/normal campaign world with a R&PL on the other side of the looking glass and Veins laying deep below the surface, beyond the deepest dungeon or mine. Yoon Suin is a place that can be entered by ship like the original Tékumel where your players need to figure out how things work and find a place in it. All three have their own systems for just about everything and incredible visuals that can deliver the wonder missing from the muddy roads linking the pseudo-european fantasy settings that have all started to look like New Zealand since 2001.

Maybe the audience doesn't matter. Maybe the need for wonder is my own no matter if I'm playing or running. I think for my next campaign setting I need draw inspiration from the crazy fantasy illustrations and paintings that have no limits like the work of someone like Moebius. Start with visuals full of wonder and build a fantasy world that makes sense with that.