Last week I went out to an evening with friends that revolved around playing some boardgames. There was great food, drink and a couple of copies of Settlers of Catan.

Settlers of Catan is a popular board game, largely because its design keeps almost everyone at the table in the running for the win until the last turn. It's often a close win, keeping tensions high and making it exciting to play. I love it for these things as well as the multiple levels of strategy that allow a nimble thinker to change direction and pull off a win even when it looks like all is lost. Dog-piling on the front-runner is rare, since you never can be sure who the points-leader actually is. The players tend to need each other so the game is cordial and burning someone is something to be entered into carefully. 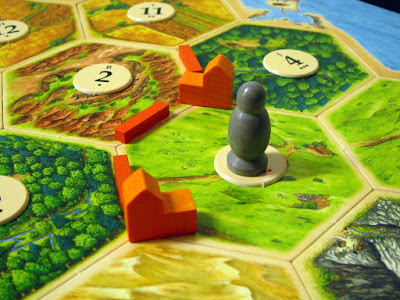 The place where Settlers is lacking is the instructions. They are pretty terrible. There are on-line resources that are useful but you need to be careful about whether those are official rules or interpretations. The rules in the box are not helpful. My friends who hosted the evening played their first game of Catan with my wife and I. They fell in love with the game, bought their own copy and immediately introduced it to more people. What they didn't do is read the rules. They had played with us and thought they knew them. The people they taught to play learned from them so almost everyone at the party was "cheating."

It would be more accurate to say they were all playing with the same house rule. As a player of Table-top RPGs I am used to and comfortable with house-rules so after teasing them a bit for being cheaters I accepted their method and we started the game. While we were playing I was observing the mechanics of the game and thinking about how the change disrupted the balance of play. In an RPG balance is not terribly important because the lack of structure allows so many variables into the play that balance is largely irrelevant. In a board game, the structure of play is fixed. All of the options are proscribed under the rules and flow of play. The variables allowed are strictly controlled features like die rolls or card draws. The trading element of Catan is another variable, but even it has specific rules. The board is also random but its set-up is still carefully structured.

In the set-up phase of Catan where players are placing their pieces they will collect resource cards only from the second (and last) settlement piece they place. On Wednesday, players were collecting resource cards from both settlements. I resisted this cheaty method of starting the game, but couldn't form a compelling argument against their logic that this was more fun and accelerated game play.

It certainly accelerates game play, but it gives the people playing first and second a huge advantage. The regular rules temper the advantage of placing settlement pieces first by making the first players choose the territory that gets them their resources last. It also tempers the advantage of playing earlier by making certain that first couple of players have fewer resources to work with. The cheaty resources for the everything house-rule disrupts this balance completely.

Sadly, I didn't understand the effect of the rule completely until after I had won the game. At the time I was excited that I had one in spite of the house rule, but now I realise I likely won because of it since I went second.

What I've taken away from this experience is a new appreciation for the elegant design of one of my favourite boardgames. Settlers of Catan is a well-crafted experience for any group that I would heartily recommend. It is balanced and fair. Chances are when I play over at their place they'll want to play their way so all this musing only serves to increase my appreciation for the magic of the game design. I doubt it will change anyone's mind about how they play.

I've never considered board game design before. It presents some interesting challenges. Who knows? Maybe this look behind the curtain of Catan will inspire me to follow though on some crazy idea for a board game if the muse ever strikes me.
Posted by David Rollins at 12:11 No comments: