A Dungeon Master's Favourite Spell or, Why Bother with Lichdom Anyway? 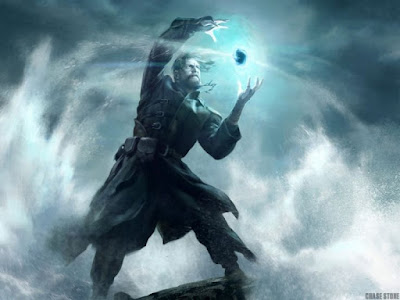 Since the very first edition of Dungeons & Dragons the spell list for magic users included Magic Jar. It is in every edition and almost every OSR retro-clone and second generation clone. Its inclusion is a huge benefit because this spell could be the core element of a horrific villain in any campaign.

Magic Jar is a fifth level spell in most D&D-type rules (except in 5e, where it's 6th to stop players from combining it with Contingency*). With slight variances between editions and games The Magic Jar spell works by placing the caster's essence, intellect, personality, experience and soul into some kind of gem or crystal receptacle (the magic jar).  From the magic jar the caster can possess the bodies of others. Originally the caster could possess any living creature but in later editions eventually became any living humanoid.

The potential for a magic user to terrorise a party with this spell is delicious!

Suddenly anyone, even trusted allies, could become an enemy wizard without warning! This device would be most useful in a long-running campaign where the player characters have connections to the world and the players have built up expectations about how the NPCs will act in certain situations. The disruption of those expectations would definitely freak out a party before they put together what is happening.


Another feature of the spell is the effects of body death. If the host body dies the caster is pushed back into the gem, the soul of the host body is then pushed out and dies. From there the caster can try to take another host within range. The spell doesn't end until the caster returns to their own body so there is no limit to the number of times the caster can experience this kind of death. If the caster's body dies the spell effectively never ends. The caster continues to move back and forth between the magir jar and new hosts until the magic jar is destroyed. The destruction of the magic jar only strands the caster in the host they are in and destroys the soul of the host body. Even then, it's no big deal if the caster has another suitable container and time to cast Magic Jar again. The real danger comes from being in the jar when it is destroyed or stranded in a host when it is killed.

Why would a caster trade their humanity for lichdom when they could become functionally immortal with a fifth level spell?

The idea of a caster trapped in a gem creates some interesting possibilities. An adventuring wizard could cast Magic Jar in an attempt to survive certain death and become part of a treasure hoard. The party could defeat some terrible monster only to find out part of the treasure is cursed with the ghost of a dead wizard that keeps possessing people around them. The gem could be in the belly of a sea creature that attacks the ship the party is travelling on, leading to one of the crew suddenly casting spells and insisting they not let sea creature sink out of sight.

A magic user could be waiting in a gem for a suitable host any length of time. This circumstance will have a pretty profound effect on them once they are able to act in the world again. They would have lost all their resources in the intervening years! If they had a tower it would have new inhabitants at best and be a crumbling ruin at worst. They have no spellbook so all the spells they have are the ones memorised when they entered the magic jar. Any magic items or wealth they had at the time of their body's death would be long gone as well. All friends and allies are dead. It might be that no one even remembers they ever existed at all! A terrible blow to a heroic wizard! Such losses will likely motivate them to regain their lost wealth and position. They might be able to rationalise all kinds of terrible behaviour.  Even a hero who died defending their world may not feel any kinship to the people of the current era and plunder it ruthlessly.

A long sojourn in a gem could have some severe psychological effects as well. The caster might become unhinged. If you want to have a crazy, body-stealing wizard stalking your party, this setup is a plausible one.


A magic user who started using the spell with the best of intentions to extend their life so they could continue to protect people will begin to feel less empathy for people with each life they steal. The party could meet this heroic figure of legend only to find them descended into a narcissistic psychopath and even more powerful than in the past in which they made their name.

What I like best about this idea is how I could use it in play. Even though such an enemy could start with less spells and resources at their disposal they can use hosts to spy on the party and influence others against them to undermine their position in the land. They could use hosts the party doesn't want to kill, or at least not want to let the locals see them kill. If the wizard possesses an eight-year-old girl to go after the party in the middle of a crowded market it's not going to go well for them when they fill her full of arrows.

Depending on how angry the villain makes the players with these sorts of antics the party might spend a whole campaign trying to track down this magic user and stop them with a minimum of collateral damage. They may need the help of others, need to quest for an artefact or special spell. Who knows what adventures it could lead to?

* I think the designers of 5e D&D did an excellent job adjusting and tightening up the descriptions of almost every spell so it could be used only the way they thought it should be used. I would not call this situation progress.
Posted by David Rollins at 16:22 No comments: