My group has started playing Marvel Super Heroes for about three sessions now. Before that I don't think I'd played it since maybe 1991. I went through a phase in the 90s where I delved into increasingly complicated RPGs with crunchier and crunchier systems. I think that trend probably culminated with HERO Fantasy. Nowadays the pressures of kids, business ventures, career and other creative pursuits makes a fast, rules-light system like MSH pretty much perfect. 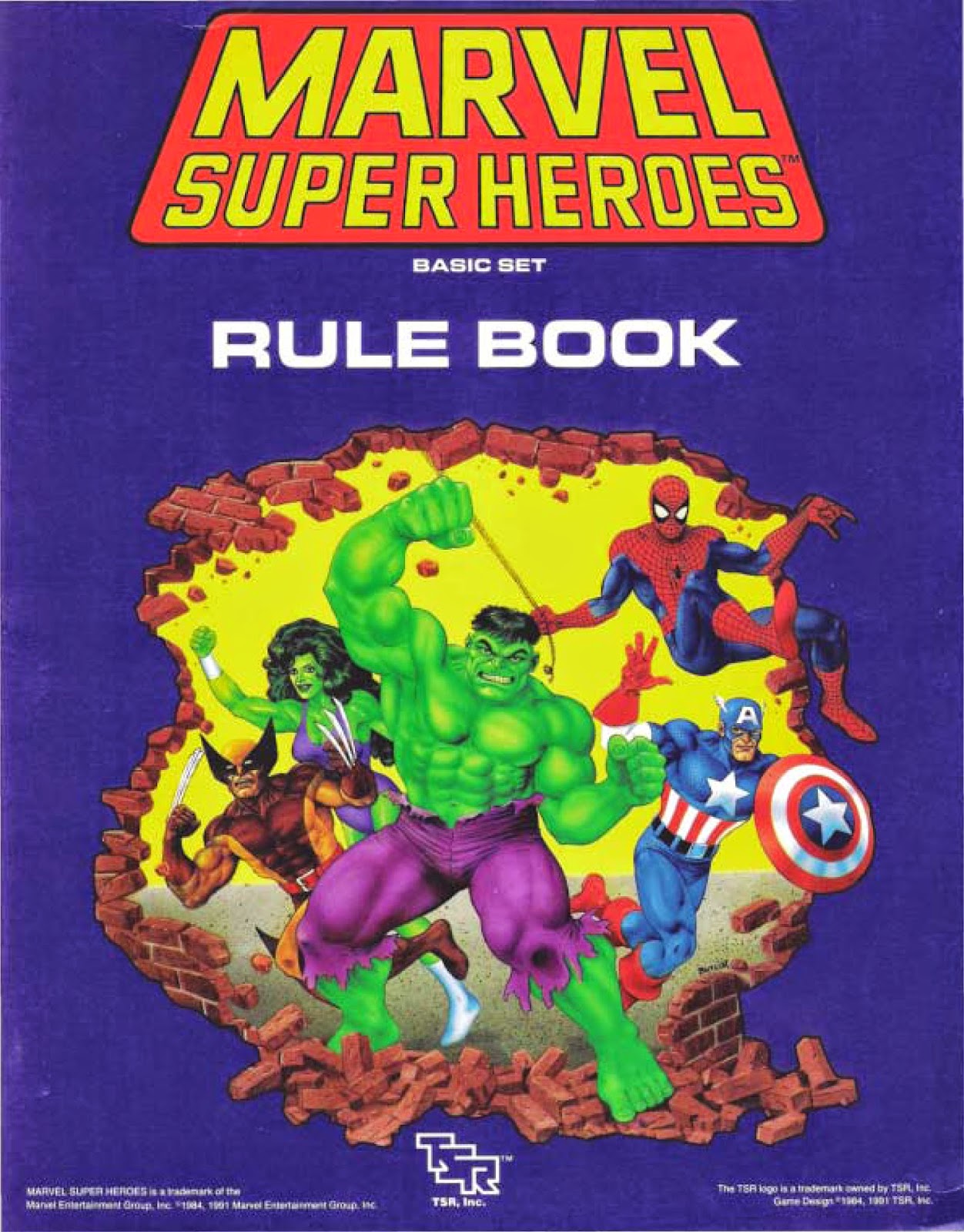 This is not some grognard post about how RPGs peaked in the 80s or how I don't need new games. No, what struck me about the system after returning to it after so long is how similar it is to a new RPG. People keep telling me that Fate is the best system for a supers game. Now I understand why.

The Fate Core system and its streamlined version Fate Accelerated Edition share a common language with Marvel FASERIP. There is a ladder of adjectives describing both the ability of the characters and the intensity of the action. Granted, the language of MSH is more over-the-top with words like "Incredible" and "Amazing," but it is a comic-book game. Words like "epic" and "legendary" fit Fate's assumed fantasy setting even if they seem a bit dry in comparison. The feats and stunts of both games match up well enough that it seems like no accident. Both games also lack the lethal element you find in a lot of old school RPGs.

The real kicker though, is the special Fate Dice. Marvel Super Heroes uses percentile dice and a chart. In a single roll you get your result and the degree of your success (like how much damage you do). Charts fell out of favour sometime in the 90s (probably around the same time dice pools became all the rage). The fancy fate dice offer the same variation of success in a single roll that you get with the Marvel FASERIP system without the cumbersome retro chart from the dark ages of gaming. 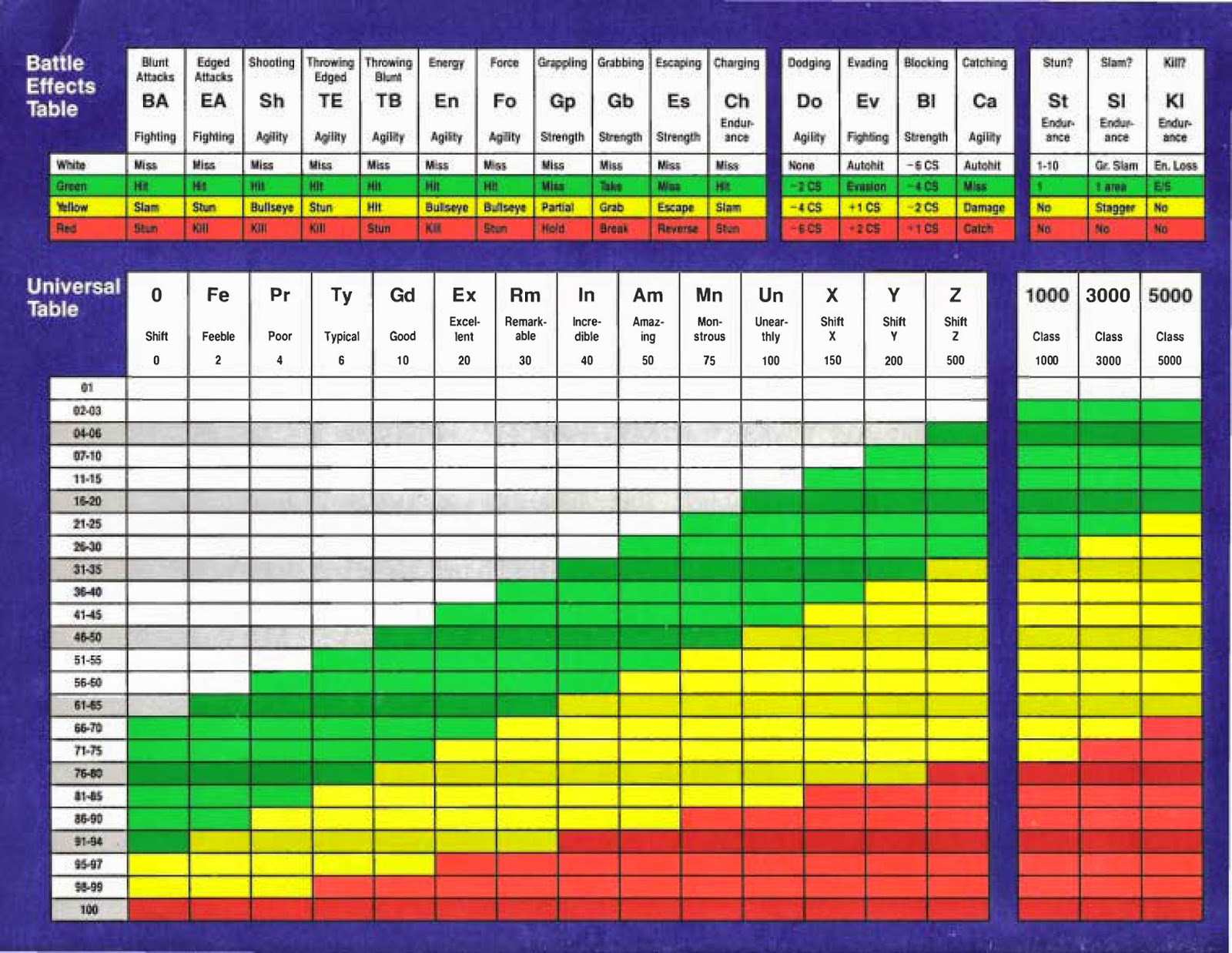 (cumbersome retro chart from the dark ages of gaming)

The place where the systems diverge the most is the randomness of character generation. Even though you are allowed to choose powers after rolling the categories in MSH (so you don't end up with opposing powers or silly combinations), rolling randomly for everything is the default. Fate is all about choosing all the elements of the character to build something interesting. I find I get more interesting characters by discovering them through rolls. Had I chose my character's abilities I would have made them all water-based and had a character that could transform into a mass of fresh water so I could move freely and paralyze vampires with ease. Instead I ended up with the Crimson Cricket, an armoured strongman with a sonic attack and wings. The light manipulation power I rolled turned out to be pretty useful against vampires as well. Oddly, the player in our group who min-maxes (he calls it optimizing) his characters chose a similar power group, without the light manipulation. It will be interesting to see how we differentiate ourselves on the team despite that.

Certainly there are more differences than similarities between MSH and Fate, but gameplay for the two games has a common feel. I remember a lot of gamers having trouble moving between MSH and other systems back in the day. The distinct, loose nature of the Marvel system with its one-quick-roll-and-you're-done style of play might account for that. It also might account for why the game hangs on today. There is so much love for Marvel Super Heroes on the internet it is insane. There is even a website with free downloads of all the MSH rulebooks, supplements and adventure modules called Classic Marvel Forever. The site has existed for 14 years so it's safe to say Marvel is letting it slide. The fact that such support exists for an out-of-print game from the 80s blows my mind a little.

Our group isn't exactly playing Classic Marvel Super Heroes. We're using the revised basic rules pretty much as is, but the assumed universe is not the Marvel Universe. In true comic book style we're dimension-hopping through realities with Lamentations of the Flame Princess's Alice in Wonderland inspired setting, A Red and Pleasant Land, as our ultimate goal for long term campaigning. At the moment we seem to be moving through different fictional settings. Since our GM is a Robert Heinlein fan I assume we're moving through fictions like the characters in The Number of the Beast. While they spent a good while in Oz, our characters are destined for a jacked-up Wonderland.

If you are interested in the game you can find info from the GM's perspective over at the Dorkland! blog. If you are really curious or jonesing bad for some FASERIP, you can also check out our actual play videos on Youtube.

Bad News on the Doorstep?

The New Year is rolling in fine with some fantastic RPG material landing on my office doorstep (figuratively speaking) on the 13th. I was sick as a dog and lying in bed at home when the office manager texted to let me know a box had arrived from Finland for me. Despite battling a nasty case of the flu I dragged myself in there after hours to collect my collection of madness from Lamentations of the Flame Princess.

By the time I got the thing in my hands I was feeling a lot better so I opened it up right there. As I peeled back the packaging I was greeted by the words: "YOU ARE DOOMED."

What a great start! 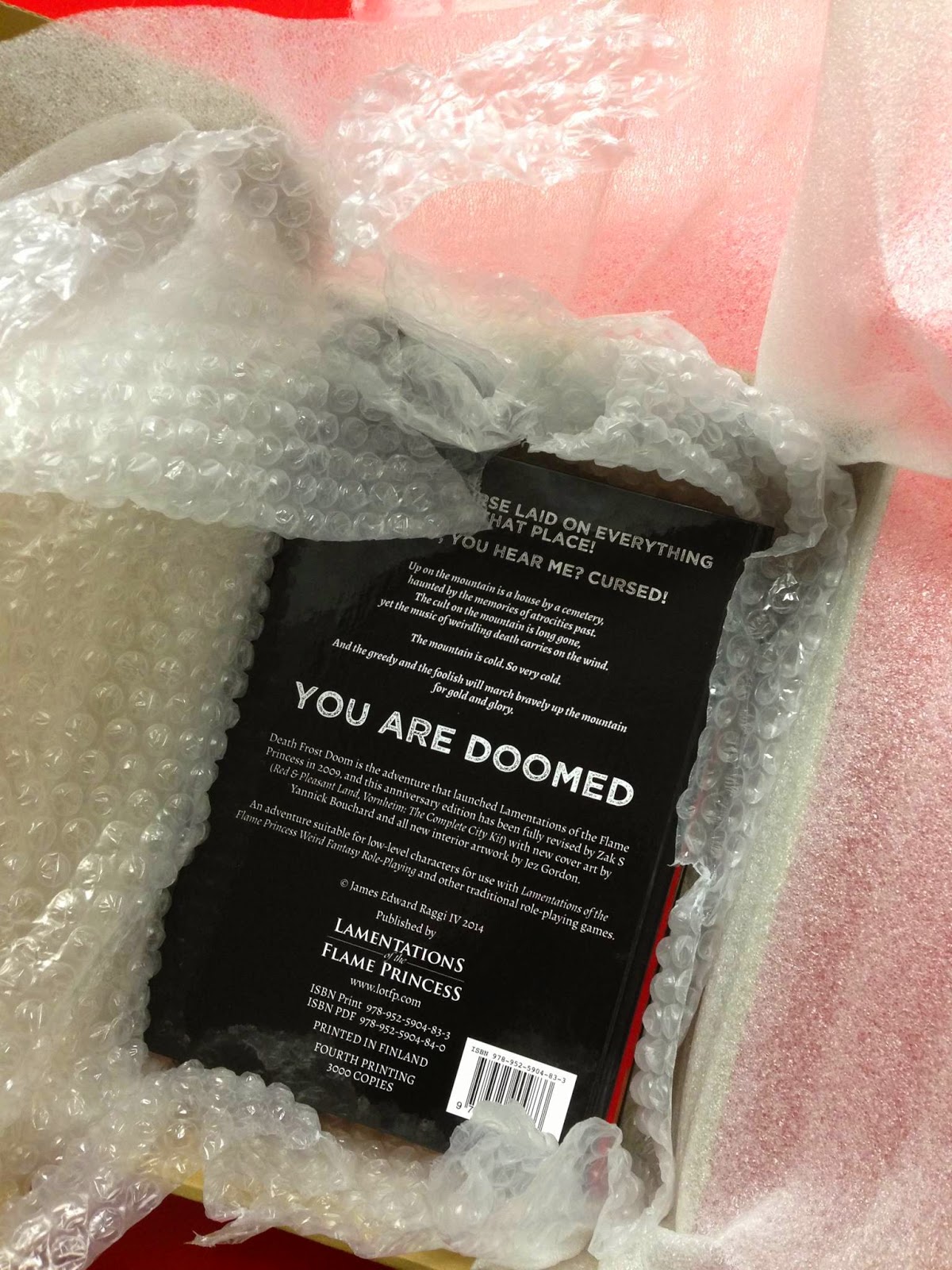 It sounds like bad news to the uninitiated, but in LotFP that just means the stakes in this adventure will be high.

I lifted each of my seven new treasures from the box with slow, deliberate care. Turning them over in my hands and enjoying their look and feel. I flipped through them, glancing at the pages as they spun past. Stopping here and there to take in a piece of particularly arresting art. I laid it one on the table in front of me and once I was done took the whole thing in. 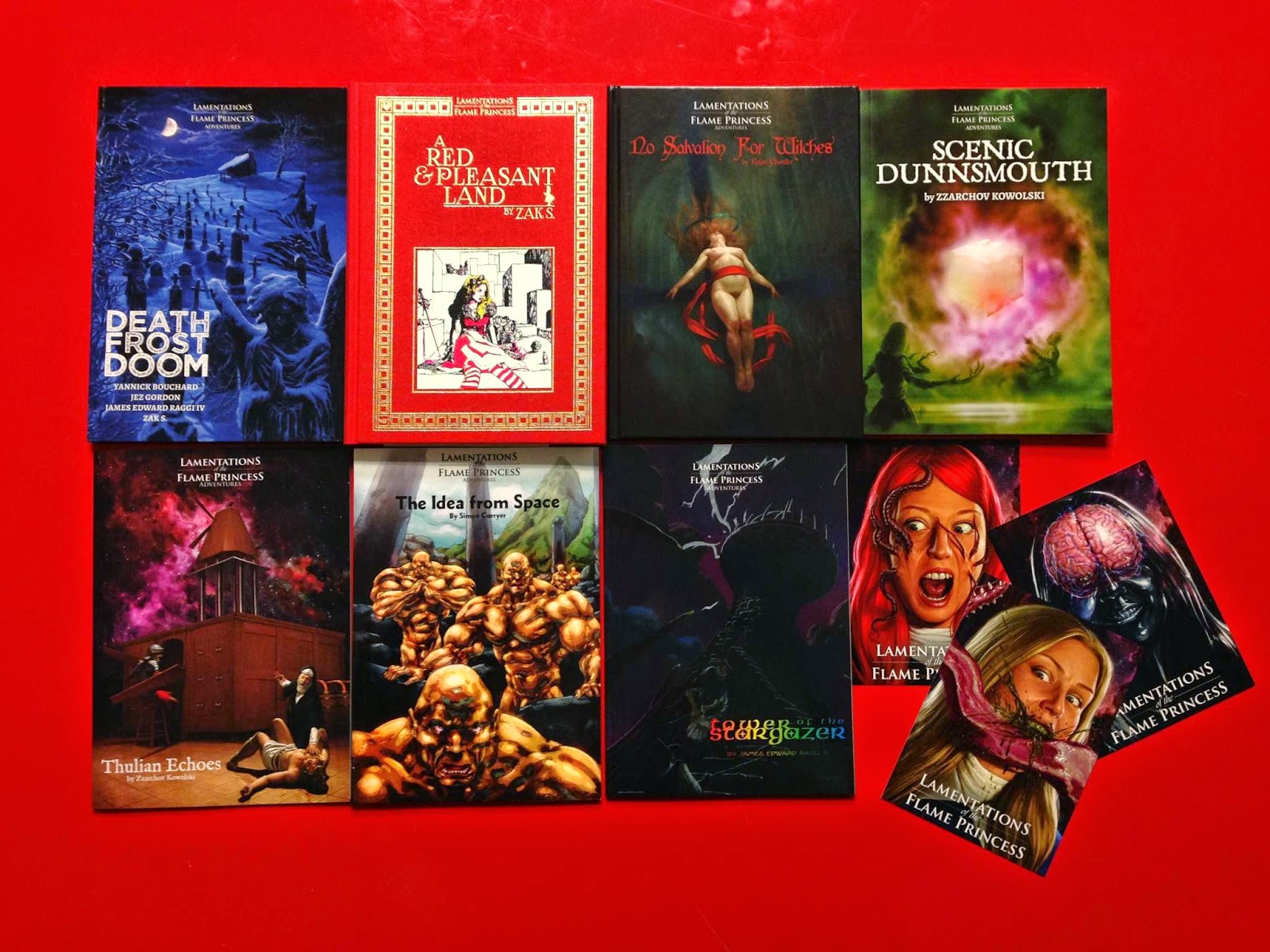 The random postcards were a fun freebie. I was impressed with all of the books. The PDFs just don't do them justice. Still, there is a reason I unpacked them on the red table. I live in a mining town in what many in Canada just refer to as "the North." There are still plenty of people living much farther north than me, just exponentially more to the south. Because of the mild remoteness of my location I have had the pleasure of reading on the internet for a few weeks now about how wonderful A Red and Pleasant Land by Zak S is. One heartless person has even teased me about it without mercy. My anticipation for this particular book had built up to a near frenzy. 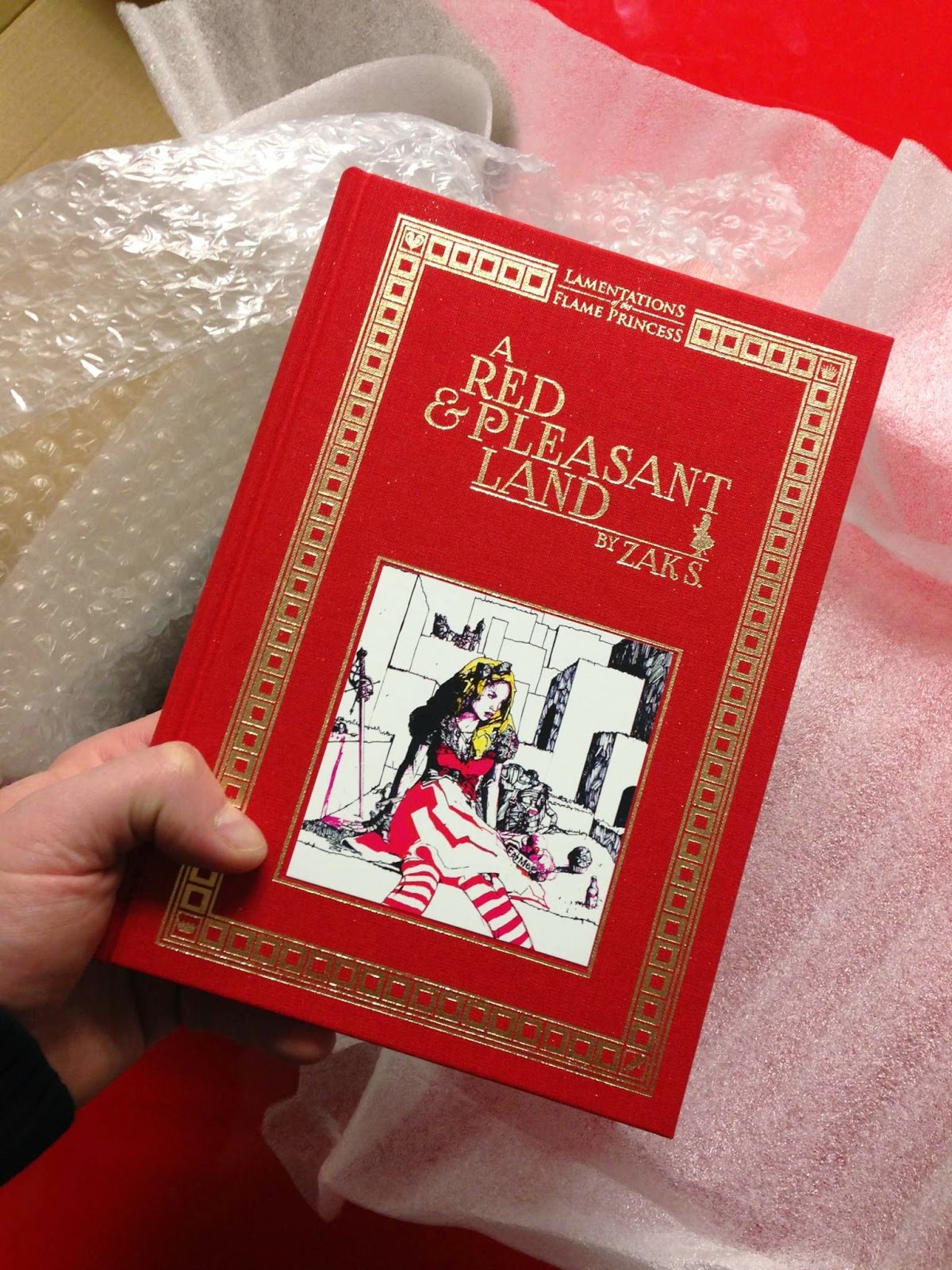 I was pleased that as thing the book lives up to the hype and more. It feels good in my hands while I read it and it feeds my eyes with vivid visuals and balanced layout. I'm taking my time with this one so I'll post proper reviews of it and some of these other books later. For now, I'll stick to first impressions and the highlights that caught me during my unboxing.

Death Frost Doom I'm saving for later. It's the adventure that launched the Lamentations brand. I didn't even open it. Crazy right?

I have a copy of the original Tower of the Stargazer and I've run it a few times so I left the new one aside for now as well. I'll compare the two side by side when I have time.

I've mentioned Zzarchov Kowalski's innovative adventure Thulian Echoes on the blog before, but I know it will eventually get a post to itself. Yannick Bouchard's cover is fantastic and Kelvin Green's interior art lets you know things are going to be weird.

What I was really waiting for from Kowalski was his Lovecraft inspired, adventure creation tool Scenic Dunnsmouth. It's full of seductive, creepy corruption and weird time anomalies. Because each adventure is freshly generated, it's possible to play it more than once with the same group and have wildly different adventures. The kicker for this one though is Jez Gordon's interior art. His signature heavy black shapes are foreboding on their own, but in this book there's a hazy coloured glow on many of the images, hinting at the corruption that could be anywhere in the adventure. I'm hoping to run it sooner, rather than later. It would work well as an intro to A Red and Pleasant Land since the featured river could serve as a way into the Land of Unreason. Regardless, I hope I get to use it sooner rather than later. 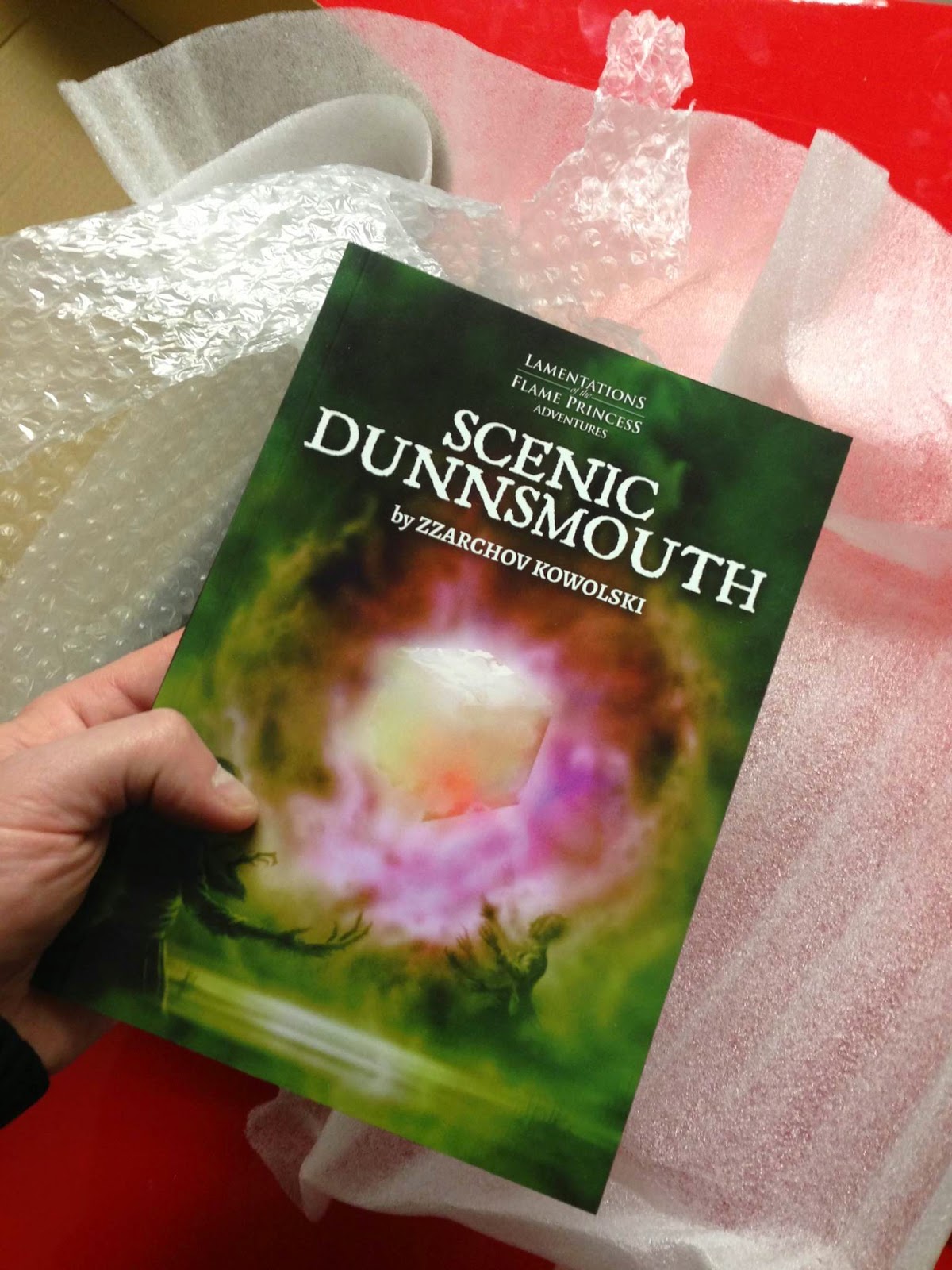 The impact of the full colour art in No Salvation for Witches surprised me. It's another one that needs an in depth review. I'd like to play it first though. I'm not sure how the time limit will play out. There's enough clues to figure everything out but they are spread out far enough there's little chance to get all the pieces of the puzzle in time to take action. In the meantime, I can tell you the production values of this book are wonderful. I am thrilled I contributed to crowdfunding project that got me NSFW.

I'm happy to get it all! There's a great collection of RPG madness here to use, inspire me, or dip into to give a lagging campaign a jolt. My LotFP shelf just keeps getting bigger and better.

Posted by David Rollins at 01:09 No comments: