Dissatisfaction with the current state of tabletop wargames is something of a recurring theme on the internet. People complain about how they don't like the new rules, the obsolescence of their minis, the necessity of buying the latest spat books, how constrictive the splat books are, and other ways the hobby is set up to milk gamers for cash. A recent Google+ thread rehashed all these issues and more.

Every time the conversation starts up I'm taken back to my beginning in the hobby in the 1980s. Back then, the only thing we needed to play was the rulebook. One rulebook full of options for building armies and manoeuvring them on the battlefield for epic battles. 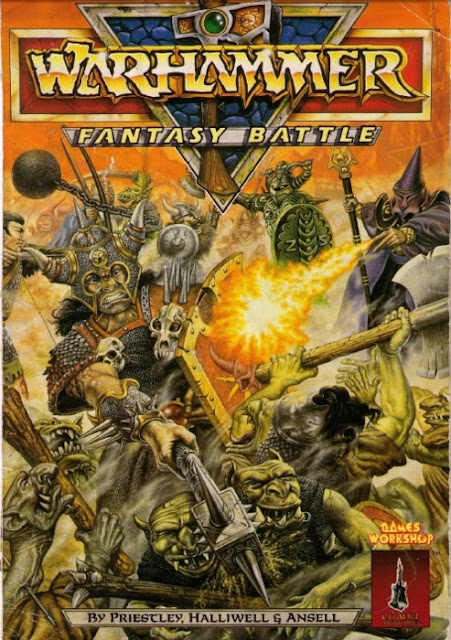 I started playing with the third edition of Warhammer Fantasy Battle from Games Workshop that my friends and I picked up at the local comic store. It wasn't long before the owner of the store was playing with us and then adding tables with terrain. Tabletop wargaming has only grown in Sudbury through the years since then.

When we started there were no restrictions on minis for "official play" or any of that nonsense. Any mini was a potential combatant. We used the GW minis because they were often the best available at the time but most armies included minis from Grenadier, Ral Partha and others. About the only thing holding the rag-tag forces together were fantasy race themes and uniform colours.

For our first games we didn't even use miniatures. We started out with coloured cardstock cut into bases. Even after we embraced the painting and modifying miniatures part of the hobby, it was still normal to see to cardstock minis with pictures or descriptions written on them fielded along side painted and unpainted miniatures.

Those early games were pretty wild. There were high elf armies fielding huge trebuchets, mixed forces that made no sense, and a list of other things that violated our assumptions about the fantasy setting the battles took place in. That all changed with the release of the Armies book in 1988. 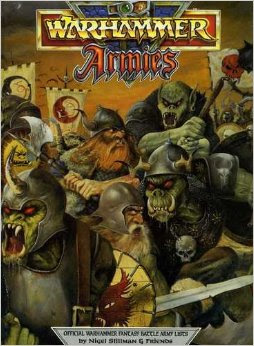 The Armies book had lists of troops that fit the theme of each race and rules for allied forces and hiring mercenaries. The flavour of the setting informed
the rosters without throwing everything out of balance. For example, elves didn't have access to heavy artillery but they did have dragons. The restrictions gave each army its own specialities and strong points. It made the choice of forces more interesting than before. It did not stop us from using non-GW minis. If anything, our needs for cheap masses of things like wood-elf spearmen only increased with Armies book. As a joke I even fielded a tree from a train set with googly eyes stuck on it as a treeman miniature.

It feels like there were less rules back then and it made for more fun. The only real problem was the magic system. It was so random. There were spells in the lists that were battle-winners. The "Vorpal Hurricane of Chaos" could devastate an army and make it impossible to fight with anything other than long range missile weapons.

The rules have changed over the editions. There have been so many editions of WFB and 40K, the biggest challenge when I play is remembering which of the rules in my head apply to the current game. The rules have improved a little but mainly it has tweaked things such as shifting focus back and forth from missile combat to melee combat.

Certainly magic has gotten better since those crazy games in the 80s. I think the best version of magic was the one that used the card decks for the different kinds of magic and a power deck to represent the ebb and flow of magic on the battlefield. It made magic an important part to any strategy without allowing the game to turn on it. Almost all of the handful of spells available to a wizard would be useful. It was random without being stupid.

Still, with the army splat books pushing the envelope farther with each release the special rules appear to escalate in a vicious circle. The last few editions have been less about improving the rules and more about wiping the slate clean to re-establish balance between the available forces. 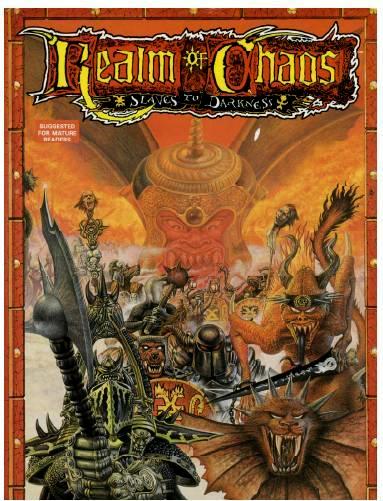 The love affair with splat books probably came out of the success of the two Realms of Chaos books. These books are notorious for the amazing art and over-the-top craziness for content. Not buying these is my one regret from those days. I picked up Warhammer Siege which we ended up using well into the later editions, but the Realms of Chaos were something that Games Workshop never did again. They never pushed as far or as high as it did with those books. My friend had them and I read through their copies but didn't buy my own because I didn't play Chaos. Sadly, I had no idea what a rare thing it was to have dark fantasy explored so deeply and so well in game form. I could write pages about the art but it's all been said before elsewhere on the gaming blogosphere. 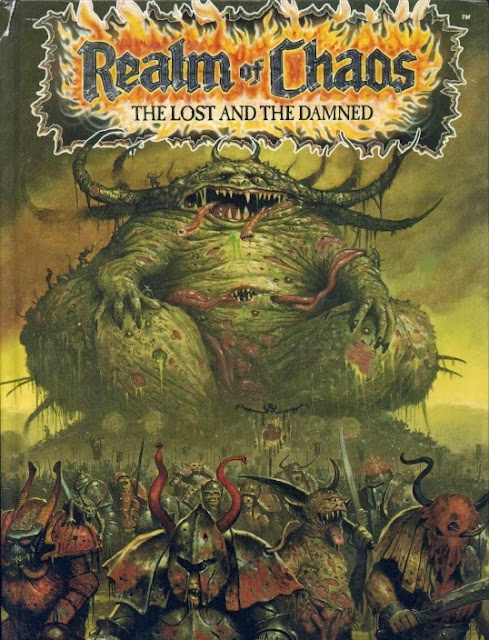 Despite all of the complaining, tabletop wargaming appears to be in something of a resurgence. There are more games to choose from now, with War Machine in particular taking some serious ground in the hobby. I even seen some reports of people playing H.G. Wells' Little Wars. I hear doom and gloom about Games Workshop, but the local store still sells a tonne of it and hosts multiple game nights filling all the tables so even the complainers are still playing it.

For me, what I really want is the excitement of those early games where the rules helped us have crazy fights on four by eight foot areas of carpet blocked off in chalk and covered in a mishmash of train set and fantasy terrain. I miss those loose games where fielding a model like a dragon could be a critical hard point in the battle line or an awful waste of points depending on how things came out with the tactics and dice.  I don't want to play the old game though. I still have the books but I don't want to use them because years of play has taught me a thing or two about how rules shake out at the table. My involvement with the OSR for RPGs has also convinced me that sometimes stepping back to earlier editions and then stepping forward in a new direction with the benefit of years of development can yield some awesome results.

The first time I encountered the complaining about GW was three or four years ago. I decided I could do better so I spent a few months designing a new wargame. I built in the flexibility to use a wide variety of miniatures and settings, from gonzo steampunk fantasy to historical re-enactment. That recent thread on G+ brought it back to me as something others might enjoy too. The first time I shared the playtest document I didn't have the blog as a reference point for development of it and it basically petered out as I became busy with other things.

For the dice mechanic it uses a variant of my 3D System. I always found the rolling of one die per mini (to hit and another to wound and then another for an armour save...) to be tedious. I understand that the large number of dice made chance less of an issue since the odds would wash out with more dice, but it makes for a slow game with unit fights taking too long. It means battles had to be fought between limited numbers of units if the players had any hope of finishing. To fix that I used rolls of three six-sided-dice totalled with all modifiers for each unit. One throw per side, per turn for each unit in combat speeds everything up and still mitigates the luck factor with the results curved on the three dice.

I've tested it a bit and the point spreads seem balanced so far. The rules have worked well enough for me but I haven't had much feedback from others on how their games went with it. I'm still not sure about the rules for flying creatures so I'd like to hear about how that's worked out in play for others. The magic system is pretty basic, but fits the rules-light system well. The magic makes the wizard models a flexible tactical piece that can affect the battle without turning the game in to a wizard's duel. Success seems a little difficult for larger effects though so I'm toying with lowering/removing some of the modifiers or dropping down the base target numbers for success. Again, any feedback about how it goes in play would be appreciated.

I'm attaching the link to the original playtest document. The game hasn't changed much from this original version. There's about 12 pages of actual rules here. The first page you can ignore. It's old text explaining what I was trying to accomplish with the game and contact info for feedback. The rest of it is a rough draft of the Open War Fantasy Battle game. Give it a try. Let me know about any holes or things that don't work in your games. I'm aware of the typos but I'd like know if the language is difficult to understand in any way. I had originally envisioned a pocket mod version of the game, but I don't see that happening ever. Too much detail would be lost.

So give the alpha version of Open War Fantasy Battle a whirl and let me know how it works out!

Posted by David Rollins at 07:26 No comments: