I was a little late to the party (that might become something of a theme with this blog) in getting my copy of the new Player's Handbook for the latest edition of Dungeons & Dragons. 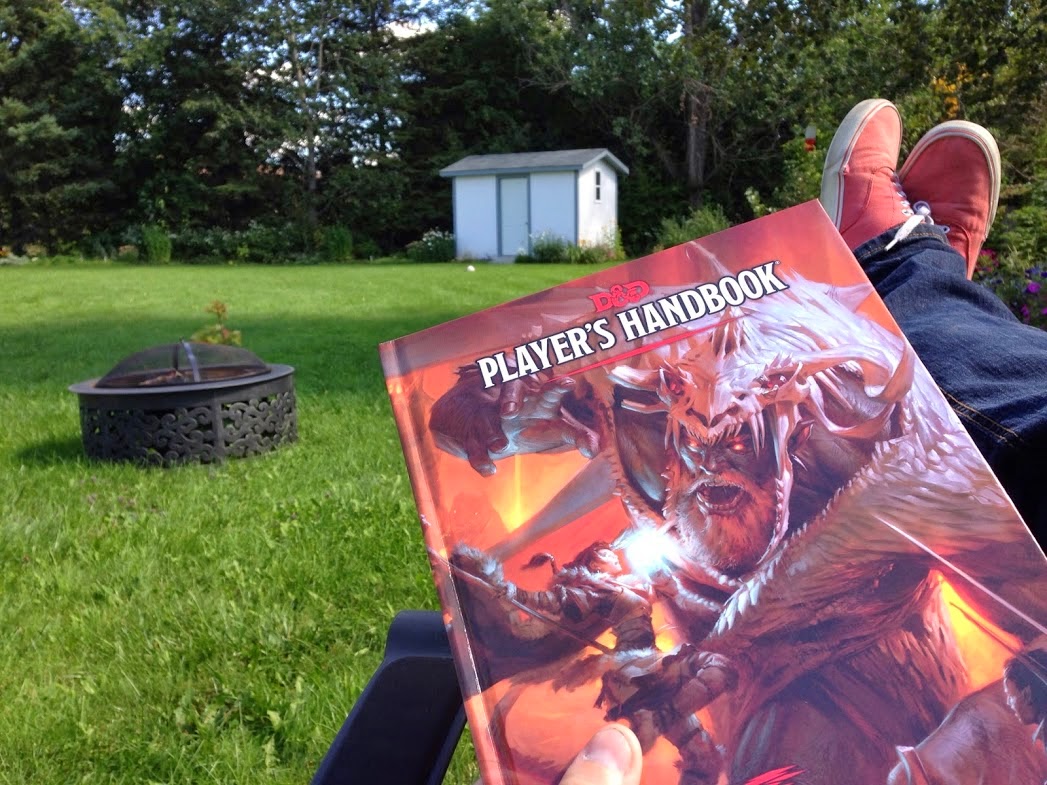 I picked it up about two weeks ago according to the date stamp on this photo. I've read it a bit at time since then, digesting every detail as well as I can. With so many rules for so many editions rolling around in my head it's difficult to keep it all straight. The new edition is full of old-school goodness with all kinds of things I like, but the biggest changes made that I noticed were to the magic.

The spell slot system and recovery through short and long rests fits in well with the new system for hit points and healing. It's all well set up to limit what you can do in a single encounter so the stakes are high in any given fight, but recover fast so you can get on with exploring the dungeon or whatever it is you are doing. That's all consistent with the pace of the new game and I have no problem with it.

In the early editions magic was useful, but with such short lists there was only so much a spellcaster could do. As the lists expanded, enterprising players found ways to layer the spells that made spellcasters extremely powerful at higher levels. Others found ways to bend the spells to do things they weren't intended for that made imaginative players extremely dangerous at any level.

In the new edition, some decent cantrips allow spellcasters to mount a decent offence in any encounter. The new rules for concentration make it impossible to stack spells like the old days, so a player needs to choose the one spell that is most useful for any given situation.

The durations have been cut down significantly as well. There are few spells that last longer than a minute now and those few rarely last more than an hour. These new limitations make wizards far more vulnerable than they've been in a long time. Even Contingency only lasts ten days in 5e so high level wizards are no longer functionally immortal. The Wish spell has clear limitations on what a player can do with it and the DM is still encouraged to interpret the wording in the most annoying way possible.

These changes bring D&D closer to the sword and sorcery genre that was a big part of the inspiration for the original game. Magic is a great tool in certain situations, but hardly the solution to every problem. You can't even turn a person into stone for any length of time anymore!

Which brings me to the most notable absence in the spell list: Permanency. There are a handful of spells that can be made permanent if they are cast in the same place every day for a month or year, depending on the power of the spell, but there is no way to just make spells permanent now.

This leads me to believe that Player Characters won't be making magic items in this edition. Magic items seem to have gone back to being rare antiquities and the province of NPCS who have paid for the necessary magics with their sanity.

Since healing potions can be made by anyone with the herbalism kit skill or purchased from the local apothecary/temple/whatever for 50gp they will still be a common item. Magical weapons, armour, rings, etc are now explicitly stated as too rare to be bought and sold though. All of these things make magical treasure a really big deal again. Players can't expect to receive magic items as they level and may never get one.

I like this return to the old-school idea that the PCs need to earn everything they get. The low-magic assumption fits the gritty kind of campaign I prefer as well. All of this could change with the Dungeon Master's guide, but for now D&D looks like it's on the right track for me.
Posted by David Rollins at 22:55 2 comments:

At long last, the beginning!

I put this page together in June 2011 and this is my first post. I spent a long time shooting a photo of my favourite dice and setting up the page layout and colour scheme so everything would be perfect. I had everything in place to start and then I just didn't do it.

I'm not sure I can even remember the guy I was in June 2011,  I've lived through so much since then. I read the text of my profile and I can see that some things haven't changed and other things have moved forward. I've mostly wound down my photography business so you won't see much on here about that. All I do now is commercial work for a handful of companies and teach some photography classes. Teacher would be a more accurate description of what I do now since I'm permanent part-time staff at a local business school and I'll change my profile as soon as I figure out how.

The blog name is still accurate. I'm still searching for magic. I'm still looking for a way to express myself creatively and I'm still playing RPGs. I've done some professional writing but I'm not certain how much I want to pursue that market. I might need some time writing what I want or need to write instead of having to write to order for other people. This blog should help in that regard.

After three years, why start now? Well my life is under control in ways it was not back in June 2011. I've survived a long bout of depression and made the changes to my life that I needed to make to stay in a good place. One of the side effects of getting on top of all that stuff is writing a blog doesn't seem so hard. I think I could write this first one knowing there will be a post to follow it and that might be the most important thing.

What can you expect from the second post and beyond? My profile hints that there will be a lot of talk about RPGs and I can safely promise more posts about gaming. You can expect posts on other related topics that overlap the genres and anything else that catches my notice. It will likely evolve as we go. If you want to get a grip on my tastes you could check out the Geeky Voices Carry Podcast that includes me as a regular co-host. You can find links to it over on the Dorkland! Blog. I'm new to this so it will take me a while to get everything linked up and easy for you.

Welcome to my adventure.

I hope we all find what we are looking for.