RPG Adventures in Space and Time or, Dogs in the TARDIS

It never ceases to amaze me the depth of creation in the world of RPGs. There are rules and  systems created for virtually every kind of play and to cover every eventuality and possibility at the table somewhere. The result doesn't always match the intention and sometimes you get the perfect system to play one game already completed in another.

Licensed properties are a special case because every time a new company acquires them they need to update the rules system to be consistent with their own brand, differentiate it from an older version of game or capture an aspect of the intellectual property the new designers think is more important than others who have worked with the same fiction.

Few intellectual properties exemplify all of these circumstances better than Doctor Who. There are a host of games out there for it with Cubical 7's version as the currently available, award winning choice. I haven't played Doctor Who: Adventures in Time and Space but I've heard some great things about it. The fact is I live in Canada and it's produced in the UK. Between the high price of everything in the UK and the cost of shipping from there to here the total cost of the thing is just too much for me. Lucky for me I already have a set of rules on my hard drive that will work with Doctor Who quite well. 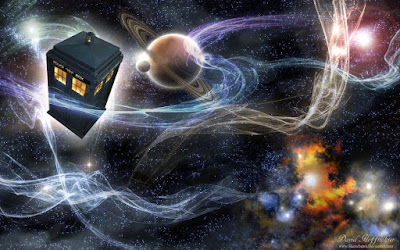 D. Vincent Baker released Dogs in the Vineyard back in 2004. Since then countless people have used it to play religious cowboys going from town to town to root out evil and get into gunfights with sinners. Baker says he created the conflict resolution mechanics to create tension in social situations because, as a GM, he felt he was allowing his NPCs (non-player-characters) to agree with player character requests far too often. His solution to that problem gave us a game that fits the feel of the conflict you would find in a typical episode of Doctor Who.

Conflict in Doctor Who usually involves talking, running and getting captured. The running in particular has drawn attention over the years but in the newer series it is something writers have embraced and really, well, run with. 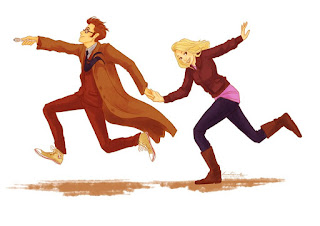 Cubical 7 uses initiative to encourage talking and roleplay over going straight to violence. The order of action places weapons use last and talking first so weapons are downplayed as a tool for players and allow the better play to keep the players one step ahead of the violent, oafish NPCs. It fits the feel of the series well as characters always have a chance to say something or run away before they are killed by the bad guys. It also explains why Captain Jack never actually uses his wonderful sonic pistol and Leela never gets to stab anyone.

Despite the fact that Cubical 7 clearly has a good handle on Doctor Who as an RPG, there's a few reasons why I think Baker's game is well suited to play a Doctor Who style RPG campaign. Dogs in the Vineyard's conflict resolution system works on a process of escalation that typically also begins with talking and moves upward as characters resort to other means to add to their dicepool in order to win the conflict. The emphasis on talking to open any interaction compliments the material the same way as Cubical 7's initiative system, but it's the way the conflict can end that really works. The dice pools are added to the conflict two at a time until someone has to use more than two to match the opponent's score (and suffers consequence because of it) or someone decides to Give.

The Give mechanic allows the character to avoid the consequences by accepting a loss of whatever was at stake. Accepting this loss allows the character to hold onto the highest die in the pool to use in the next conflict. In a Doctor Who game, Giving probably results in capture but that extra die is helpful in getting the big bad to explain the master plan and/or escaping. 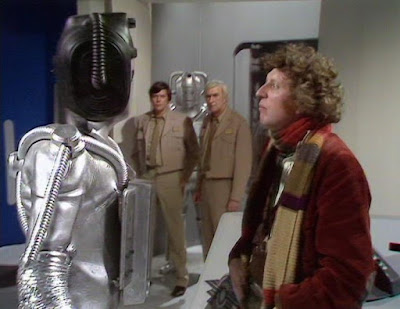 "Yes, that sounds like a great plan. It's a good thing you didn't tell anyone about it."

A typical scenario would feature the Doctor uncovering an area in the basement that has a technology far beyond the period and locale the episode is set in. He starts prowling through the high-tech lair and is confronted by a Sontaran. That's bad news for the Doctor as he just figured out it was Sontaran technology and he has no way of warning his companions upstairs. The player knows talking is his strong suit but the Sontarans have a habit of escalating to violence so he just runs for it so he can warn the others and come up with a plan.

The conflict becomes a chase through the corridors of the secret base with the Sontaran shooting its big, honking space gun to get some extra dice. The Doctor is quickly outclassed in this conflict so he pulls out his Sonic Screwdriver to try to close and lock a door behind him and add 2d10 to his pool for this wonderful little item. The player locks the door well but holds his best roll (a 7) back in case the Sontaran has any tricks of his own. Turns out the Sontaran has a big, excellent explosive device in its equipment and makes short work of the door. The Doctor immediately Gives so he can keep his best roll (the 7) and have the advantage in the coming interrogation with the Sontaran commander of the secret base so he can find out what is going on and hopefully get away back to his companions upstairs.

Giving certainly fits in well with Doctor Who, but what about the consequences mentioned earlier when the stakes are too high to stop? That tends to happen quite a bit in the new series. The Fallout could be the loss of an important item. NPCs can fall into that category and we can see a high body count in the odd episode where the stakes are particularly high. If things get too rough the Doctor might be injured and forced to regenerate. That means new character generation and maybe a conflict of its own. For a Companion maybe it means being left behind or traumatized to the point they can't travel with the Doctor any more.

The raise and see conflict resolution with escalation is a great system for a Doctor Who RPG, but what about the rest of the game? The premise of Dogs in the Vineyard is a group of people wandering from town to town uncovering demonic influence and sorting out trouble. There's a system for town creation in the rules that helps keep things interesting and allows the GM to easily present a variety of challenges.

A game about a group of people wandering through time and space uncovering alien incursions and sorting out trouble is a pretty good description of Doctor Who. The actual locales that any given episode is set in is usually no bigger than a town so that's not a problem. The town-creation system would need some tweaks to make it fit Doctor Who but with all of time and space to choose from it should be easy to come up with an exciting variety of challenges to keep a campaign rolling for years.

For character generation all the cultural stuff from the game can be tossed out but relationships certainly continue to be useful. Family seems to get dragged into conflict in the new series often enough and certainly the relationship between the Doctor and the Companions should be worth some big dice. The Doctor is at his most dangerous when one of his companions is in mortal danger and certainly they have been full of surprises when he needs help.

Character creation in Dogs in the Vineyard also includes playing out a conflict as part of the character's background. I'd modify this conflict to always be about how the companion met the Doctor. For the Doctor it should be the theft of the TARDIS.

For my campaign I'd likely have another renegade Timelord, like the Doctor, as the PC that drives the TARDIS and gathers the rest of the party, rather than have the players playing the actual Doctor and his companions. A "Doctor's" name is as menaingless as the Doctor's so it makes sense for them all to take a title such as Head, Traveller, Professor, Elder, Inspector or even Doctor (just not that Doctor).

Honestly, it fits so well I'm surprised I haven't seen a Dogs in the TARDIS hack before now. It's not like there aren't a good number of Dogs in the Vineyard Hacks to use as guides. I'll have to put this on my list. Message me if you do it or find another one first! 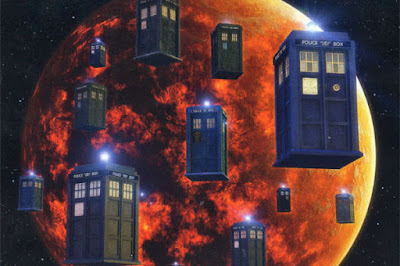 Posted by David Rollins at 14:32 No comments: