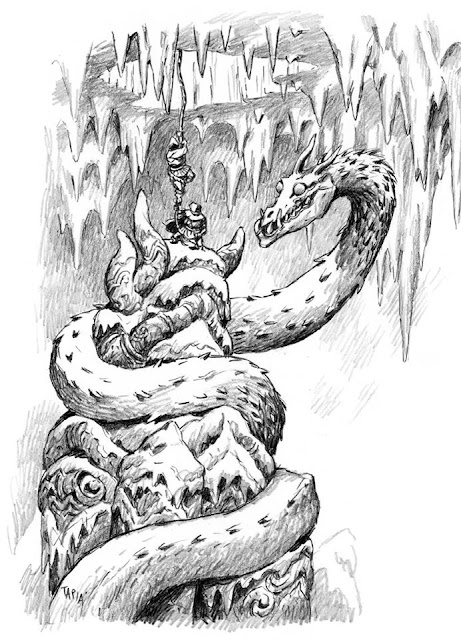 I have the tremendous luck to be playing in a Forbidden Lands campaign in the new Bitter Reach campaign setting. Forbidden Lands is the fantasy RPG put out by Free League using their Year Zero Engine rules. I played a one-shot in the main adventuring area called the Raven Lands before moving on to play in a long term campaign in the newly released Bitter Reach, a frozen wasteland north of the Raven Lands.

At first I wasn't too keen on playing a setting covered by a glacier. I live in Northern Ontario, and I did more than my fair share of winter camping so I don't find the idea of trekking across windswept snows to be romantic. I mostly think of long marches in snow shoes carrying too much gear and getting frostbite. Everyone else was excited so I decided to give it a whirl, even after they all made fun of me for having driven a dogsled team once. It would appear I am a Canadian stereotype.

It turns out that the game also has no romance for hiking through the cold. The weather is a unpredictable foe, and travel is dangerous! It became another challenge of exploration that I found myself enjoying.

This post is a session report, rather than a review, so I'll get to that. This report is from this week's game. Looking back, it blows my mind how much happens in a two hour session! The group I am playing with is a tonne of fun! The report itself is written from the point of view of my character. Ellodi is a student of winter elf lore who, until recently, lived on the coast of the Bitter Reach and made a living appraising winter elf artifacts to finance her magical studies. This report comes in media res, several sessions in.


First foray onto the glacier, Day 11


We drove our dogs hard across the glacier top, travelling straight southwest from the tower, and leaving Kastor's Edge far behind us. Avalanches, storms and snowblindness slowed our progress and we were forced to make camp before turning south.

The weather broke the next day and we made excellent time to the place we believed was the source of the strange lights in the sky.

The glacier parted before us to form a valley between the glistening cliffs of broken ice, and expose the ruins of an ancient winter elf city.

We proceeded with caution since tracks and campfires indicated we were somewhat late to the party as treasure hunters had beat us to this important find. After scouting out the closer buildings, we decided to explore the unoccupied remains of a sorcerer's tower as a place of interest and potential camp.

The contents of the tower had suffered great damage from the crushing weight of the ice and the recent melt. Only one scroll was recovered after careful work. We were able to find a few artifacts and some excellent examples of the furniture from the period. The tower doors were in excellent condition and with a little work were repaired and secured to protect us from the potential mischief of the treasure hunters who are no doubt raiding this precious archaeological site as I write this report.

Karina volunteered to remain in the tower and prepare our camp (mostly because her player didn't make this session) while we made haste to explore the other buildings we had spotted from the upper level of the tower.

We approached an important looking structure that was largely intact due to its extra thick walls. I was hoping for a library of some sort but once inside we found a structure that looked like a vault and in front of it a person that welcomed us.

This person was impossibly beautiful and charismatic. They quickly charmed the party. Lucy, the minstrel, was particularly smitten. Djhara also made advances of a romantic nature toward the person but I am uncertain if they understood since the mating rituals of the wolfkin are something of an acquired taste.

The creature claimed to be only interested in one of the many artifacts their research indicated was in the vault. They were happy to allow us to recover all the other artifacts as long as they received the medallion.

Opening the lock turned out to be child's play when comparing the stellar components to the sketch Selatula had made of the ancient star patterns in the tower we had previously explored. (The lock was actually pretty difficult and would have been impossible without that star chart. Even then, Ellodi strained to do it, and had to push a lore roll to get the job done)

Once inside the vault we found many scrolls that appeared to be documents indicating ownership. These would certainly be helpful in constructing a translation key for the winter elf language. There was also two medallions similar to the description the creature gave us. Upon closer inspection we noticed that the two medallions had the star patterns of two different areas of the ancient night sky.
We also noticed the creature could not touch the medallion. They deflected all questions about their refusal to touch either medallion. Our suspicions were aroused, but it was being cooperative and I had already marked the star-field on our sketch so it seemed harmless to let it take the artifact as agreed and potentially dangerous to go back on our agreement.

As Lucy deposited the medallion into a pouch for the charming creature I asked a question about the night sky on their medallion. The creature's charm fell before a rage that transformed it into a monstrous entity with tentacles and yellow eyes that rivaled our torches with their preternatural glow.

The demon grabbed Lucy's wrist and I felt the magic flow into her, before seeing it paralyze her mid scream. At the same time the creature roared its defiance and wrath, breaking Djhara's spirit with the horrors it held and we watched in abject terror as the great warrior, Djhara Bloodspit, folded up into a ball on the floor.

Sela reached for the second medallion, hoping to wrap it around the demon's neck. I was quicker and spoke the words to weave a spell drawing on the primal power of the fires burning in our torches to make the creature's fine clothing to burst into purifying flame. Not knowing if it might be immune to such an attack I marshaled my energy carefully, using only a portion of it. That power, increased by my frailer heritage, made the demon the centre of a pillar of terrible flame.

To the surprise of all of us, fire was the weakness of the creature and it succumbed instantly to the attack, turning to a pile of ash in a heap of burned clothing. Sela's outstretched hand dropped back to her side as her mouth fell open at the devastation of the scene. I too was taken by surprise and exclaimed, "That's not supposed to happen!"

We recovered the demon's medallion and gathered the rest of the artifacts before returning back to the tower to care for the afflictions wreaked on us by the foul creature. Lucy recovered, and in turn was able to use the power of her music to bring Djhara out of her waking nightmare.

Would that the evening had passed uneventfully, but Sela's sharp ears picked up a call for help out on the glacier. Djhara, Sela and myself went out to a crevice in the ice to effect a rescue of a wayward traveller who is even now curled up by our fire in my spare furs. She says she only wants to return to civilization after losing the rest of her party, but my companions are suspicious after the episode with the demon. Time will tell, I suppose.