I've gamed with my daughters in the past. So far we've played a few one-shots to try out or playtest games aimed at kids.

I tried to get them into D&D with the Mentzer Red Box a few years ago. Both of them loved the images and the ideas in the book. The youngest didn't really have the attention span for it at the time and the game died out after the first session. D&D is not much of a solo game.

My oldest (12) has been pushing me to play again so I asked my youngest (9) this weekend how she felt about trying D&D again. She was super-excited to play!

We made their characters Sunday evening. The level of engagement this time was on a completely different level. When they were younger I was using the art to draw them in and help find out what they'd like to play. This time around we talked it out. Part of that came from their maturity level and part of it came from my decision to use The Black Hack as the rules for our campaign. It has no pictures and the rules are so simple all we needed to talk about was class-based concepts and what they wanted their characters to be able to do. 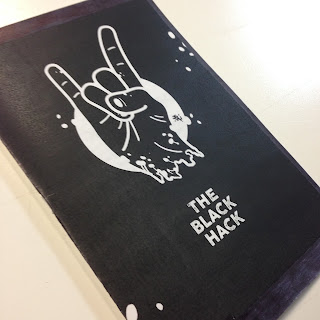 They responded well to starting with rolling the stats to find out about their characters and learn what they were good at. From there we looked at the four classes, what they could do and which ones would be complemented by the strengths and weaknesses of their characters. We also talked about what each class excelled at.

The short one liked the idea of a sneaky character who does things quietly and carefully, so she was keen to play a Thief despite her character's low Dexterity. Fortunately The Black Hack allows for two stats to be switched around during character generation and she didn't care if anyone liked her character, so she traded her DEX and CHA around to get herself a grumpy thief to play.

I barely started to ask the tall one what she wanted to play when she exploded: "Conjurer!"

This girl wants to play a wizard. I think it comes from reading her the Earthsea trilogy when she was little. She rolled a 17 Intelligence for her character so no stats were swapped.

Names came next and after some talk about naming fantasy characters we ended up with Snekava the Thief and Olys the Conjurer.

While the girls shopped for their equipment I rolled up a henchman to help support their characters and avoid the TPKs that come with a party of two. Wojeb the Cleric (AKA Ol' Wojeb) came out of a low STR and CON but relatively high WIS. He can't carry much more than a torch and a shield but his hit points are high enough he should make an effective meatshield.

For the campaign I think I'll start with B2 The Keep on the Borderlands. It's a good spot for it and the Caves of Chaos allow for all kinds of different approaches to dealing with its monstrous inhabitants. Besides, it's an iconic adventure with sandbox elements that I ran recently in 5th edition so there's little for me to do in terms of prep.

As for the larger world, I'm not sure what I'll do for that. I'm considering setting it in the old D&D Known World setting on Mystara. I've already done all the work of sprinkling my favourite OSR and classic D&D adventures throughout the setting. I've also subbed out chunks of the setting with cooler stuff from the Hydra Collective. For all that, the world has a history that makes suspension of disbelief easy to achieve. No matter what I do, it's all new to them, so exploring it will blow their little minds!

As far as system goes, I chose The Black Hack for a few reasons. I've already seen that it's simplicity makes it attractive as a way to bring beginners into D&D style gaming. I also like how it uses some of the modern gaming mechanics like usage dice and advantage/disadvantage. I want my girls to benefit from the old school, but I don't want them trapped there! I also like how damage by class makes weapon restrictions irrelevant so I could let them use whatever weapons they wanted without messing up the game balance. The biggest thing that made me want to use it for my daughters is the level advancement. Every level they'll roll for each statistic to see if it increases. This kind of obvious character improvement is going to make levelling that much more exciting and keep them engaged in the campaign. It also means low stats are not a big deal since they are more likely to increase than high ones.

We've decided on Wednesday evenings for our games since my wife is out that night and both of the girls are home. I'm looking forward to campaign play with the girls. I can't wait to see what they discover about their characters as they change and grow through play!
Posted by David Rollins at 23:00