I reviewed The Black Hack in my last post. I mentioned that I felt like I had a few Hacks of my own to add to the growing number of genre specific clones of David Black's Modern OSR fantasy RPG.

I think an Early Modern Era, historical, weird-fantasy hack would be a lot of fun to play. For such a game I like my magic dangerous and unpredictable. It's something I've talked about before. Mike Evans came up with a good system to make sorcerers' casting flexible with an element of unpredictability with the usage die mechanic, but it lacks the danger I think is needed in RPG magic. 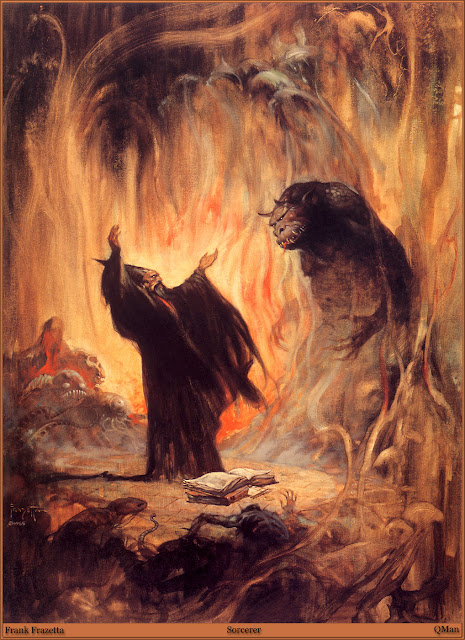 The usage die mechanic (from page 8 of the Black Hack) assigns a usage die to any resource ranging from 1d4 to 1d20 to roll when it is used. A roll of 1 or 2 brings the die to the next lowest value for subsequent rolls. Rolling 1 or 2 on the 1d4 means the resource (in this case magic) is exhausted until that resource can be replenished. The sorcerer can gain back one die for six hours of uninterrupted rest.
For my take on magic cast with the usage die I took a lot more inspiration from Barbarians of Lemuria, then mixed in a little Dungeon Crawl Classics and the spirit of weird fantasy.
Any time a sorcerer casts a spell the player rolls a number of usage dice matching the magic level of the spell. The spells are divided into three levels of sorcery: 1 - the Forbidden, 2 - the Infernal, and 3 - the Inscrutable (I'm still not entirely happy with the name of level 3). 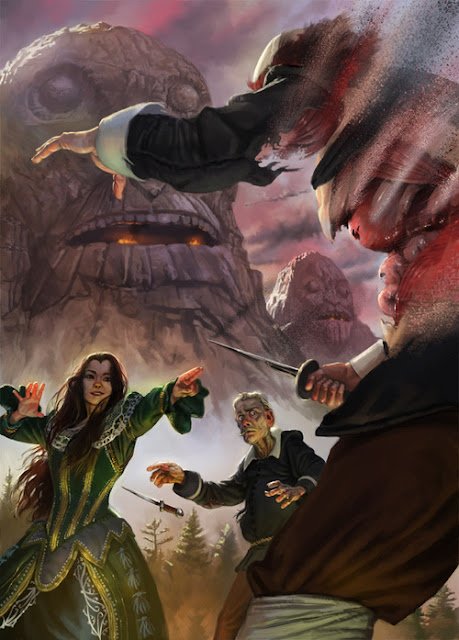 The first level of sorcery consists of forbidden formulae and ancient rituals that allow the caster to bend reality enough to do anything a fully trained and equipped person could do, only with more ease. For example: a warrior with a sword can do 1d8 damage to a foe by attacking them. A sorcerer would utter a spell of forbidden magic and merely point at the foe to tear away their flesh for 1d6 + caster level in damage. A sorcerer can use this magic to create a light source, open a lock or climb a wall in a moment because a person could do so with a few minutes and the right equipment. It matches up in power roughly to the first and second levels of spells found in the Black Hack.
The second level of sorcery is more dangerous because it exposes the caster and everyone around them to infernal corruption. The player rolls two usage dice and takes the lower result because these spells are more taxing for the sorcerer to cast. The danger comes into play if the player rolls doubles on the usage dice. Doubles result in a casting mishap. Since it is more likely to roll doubles on D4s than D6s or D8s, it is more dangerous for low-level casters or exhausted high-level casters to use this level of magic.
Infernal magic calls upon the dread powers of chaos to reshape reality in larger ways for the caster's benefit. These spells allow the sorcerer to do things normally impossible for one person. A sorcerer can use this level of magic to fly, to transform something or knock a hole in a stone wall. Infernal magic could be used to create a poisonous fog that does 1d6 + caster level in damage to all nearby foes, or allow a sorcerer to vomit a swarm of demonic insects onto an opponent to eat their flesh for 1d6 damage per caster level. With so much possible in a moment with a whisper and a series of gestures this corrupt magic is tempting to use. It matches up in power level to many of the third, fourth and some fifth level spells in the Black Hack. 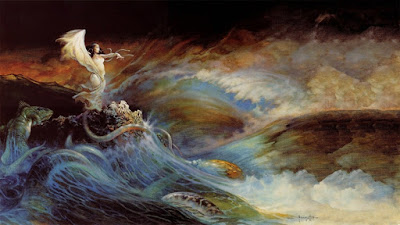 The Inscrutable level of magic comes from the recorded whispers of malignant intelligences in alien dimensions. Their motivations are as unknowable as their form.
This third level of magic is difficult, requiring special components such as time, place, specific alignment of astronomical bodies, assistants to help perform the ritual, and a specific tome or artifact. The more powerful the spell the more conditions the GM should apply to its casting.
These are spells of tremendous power that come at a terrible risk to the caster and their world. With this magic the sorcerer could create an earthquake that could level a city or create a magic plague that could bring an empire to its knees.
It can also be used to undo lower magical effects such as restoring a character turned to stone. It could be used to create a magical item. It could create a passage through chaos itself to allow a caster and their level in companions to travel anywhere in the world in an instant. It matches up in power to some of the higher level spells available in The Black Hack.
When a sorcerer casts an inscrutable spell they are flirting with disaster and draining their power. The player rolls three usage dice and reduces their magical power by one usage die for every 1 or 2 rolled. Doubles result in a casting mishap. Triples result in a casting catastrophe. There is no table for this result, match the effect to the scale of the spell, but tearing holes in time and space that allow extra-dimensional invaders to pour through is one way to go. Accidentally transporting the whole party to Geoffrey McKinney's Carcosa is another.

One thing I like from both BoL and 5e D&D is the cantrip magic. Cantrips as minor feats of magic that can be cast with little danger of exhausting a sorcerer's magic sounds like a fun addition to the game. Little things like moving small objects, changing the apparent value of a coin for a few moments, creating a brief wind to blow a door shut, removing a stain, lighting a torch, creating small sounds as a distraction, detecting magic, etc. For these simple spells the sorcerer could test Int for success. A natural 20 would reduce their usage die for magic.
The usage die available to sorcerers would depend on their level:
I also roughed out a 3D6 table for casting mishaps:
3. 1d6 random people/creatures present become hybrids with another random creature
4. Earthquake for 1d6 moments
5. Random extra-dimensional invader/demon summoned (usage die in HD) and attacks caster
6. The minds of all nearby people randomly switch bodies
7. Random caster's relative teleported to close range with caster
8. All nearby gold turns to lead
9. Random caster's possession disappears
10. Roll on corruption table for sorcerer *
11. Roll on corruption table for sorcerer *
12. All nearby wood turns to glass
13. All nearby drawn weapons turn into something random (flowers, butterflies, etc)
14. All nearby metal super-heats for 1d6 moments (1 damage for small items, 1d6 + caster level for metal armour)
15. 3D6 HD of creatures put to sleep, centred on but not including caster
16. Random extra-dimensional invader/demon summoned (usage die in HD) - roll on reaction table from (page 8 of the Black Hack)
17. gravity reversed for 1d6 moments
18. Roll on corruption table for 1d6 of sorcerer's random allies
*There are plenty of these all over the blogosphere, I'll simply pick one while I playtest. This result is by far the most likely, so the greatest risk is always to the sorcerers themselves.
The Sorcerer as a character class is basically the same as the Conjurer outside of casting. I'll be trying this one out as soon as I get a group together to play The Black Hack. I think any player of a sorcerer that pushes their luck too far or over-reaches their level will likely end up in deep trouble.
Posted by David Rollins at 22:45