This is a first look at Kiel Chenier's haunted house adventure and tool kit, The Hell House Beckons. If you are looking for something different for your table that embraces the spirit of the Halloween season, keep reading!

Before you read this review it's important to note a few things in the spirit of full disclosure. Kiel gave me an advanced copy of the PDF. I didn't pay for it like everyone else so my copy has typos and other errors that yours will not. I won't be able to comment on the editing. I've also gamed with Kiel as a GM and I like him. It is possible I am biased in his favour even though I will do my best to be objective. This review will be a bit spoilery, but I won't include any information players can use to beat the adventure. 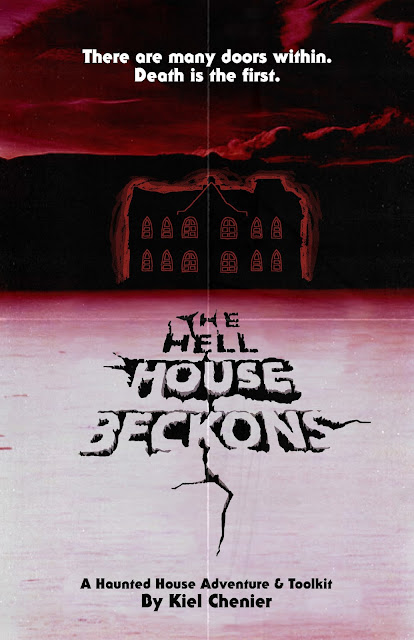 My first impression of the cover was that it mixed cartoon style silliness with some serious creepy horror. It reminds me of the Hilarious House of Frightenstein TV show for kids from the 1970s (Vincent Price was a cast member). I scrolled further expecting some Evil Dead style shenanigans. The Evil Dead impression fit as well as anything. Kiel is drawing on many horror tropes for this adventure, making it a kind of Frankenstein's monster itself.

Kiel is upfront in the GM advice section about how his goal is to make the House a malevolent character in its own right. The House is trying to harvest the party's blood, souls and sanity for its own evil purposes. The House itself has a long, terrible history and the PCs will have easy access to it. The background gives some clues to what they'll find in there but none on how to deal with it.

Even the successes of the group can feed the House. Any blood spilled or souls destroyed gives the House the power it needs to confront the party directly. The other thing feeding the House is the sanity mechanic. The adventure adds a new Sanity statistic to the PCs and NPCs. The Sanity stat is where the system agnostic approach comes up a little short. The Hell House Beckons is designed to be used with pretty much any D20 RPG but it is clear that the adventure was written with Fifth Edition Dungeons and Dragons in mind. If I used that system I'd add a few rules of my own. The text encourages this behaviour but doesn't make any suggestions.

The first thing I'd do is give some fantasy races a bonus to the Sanity statistic. Tieflings would definitely get a bonus of one or two from their infernal heritage. Others would depend on the setting although Dark Elves would certainly have a bonus at my table. Dwarves would also be a good choice and work well with the back story. Since the house only claims its Sanity points from the characters after a save I'd give certain classes proficiency bonus on the save as well. Warlocks are a must for proficiency on a Sanity save. I would consider giving them advantage on it with certain pacts as well. I think Clerics, the adventure-specific NPC Medium class and maybe Wizards of the illusion or necromancy school should also add proficiency to Sanity saves.

The deadly countdown is a mainstay of horror so the Hell House Beckons supplies some endearing NPCs as red-shirts. While I liked the NPCs for the multiple ways they give clues about the House (dying is only one of a few), I find the NPCs add a Scooby Do element to an adventure that punishes such actions without mercy (let's split up and look for clues gang - oh no, a ghost chopped off Daphne's head and is wearing it!). It's not necessarily a bad thing, as it increases the party's vulnerability without directly harming the PCs and the players can work to overcome it. The NPCs also cover off particular archetypes usually found in horror movies that the player characters are not likely to supply without turning the thing into a railroad or story the players are watching rather than playing in.

The House keeps the souls of the recently departed from going far so all dead PCs hang about as ghosts who can still play. There's even a possibility of returning a ghostly soul to its body and coming back. That means even the staunchest non-killer GMs can indulge in a little PC slaughter guilt free.


The best thing in this adventure is the way Kiel handles the ghosts. In the Hell House Beckons ghosts are all unique creations. There are a few linked directly to the house's history, there are some more general entries that could easily be dropped into nearly any adventure, and there is a table for creating random new ghosts. This variety makes the ghosts far more interesting since different ghosts will respond in different ways and can be defeated or helped by different strategies. My favourite part is how the ghosts are tied thematically to the place or way in which they died. This addition makes the ghosts more like what you would find in a good ghost story or horror film. That they fit the expectation of the source material rather than the Dungeons and Dragons Monster Manual is a huge win in my book. I'm not fond of all the ghost descriptions including: "Usual Undead powers and immunities apply." It means your GM needs to have a bestiary or monster manual with ghosts in it to have everything you need to play. Some of these other elements from whatever bestiary may not work well with what is already here. I would have preferred Kiel include complete descriptions and make whatever changes he felt were important to the theme of the ghost for the Hell House Beckons himself. Zak Smith completely rewrote vampires in A Red and Pleasant Land and that adventure won four ENnies. There's no reason to hold back.


The ghosts can inflict some strange and horrible effects on the characters. For example, ghosts that drowned can fill a character's lungs with water. One ghost that spent much of its life in the form of a cat can infect a character with cat-ness. You think cats are cute until they are replacing your character's limbs and sprouting from random body parts. The juxtaposition of the ordinary with the horrific has worked well for the more frightening episodes of Doctor Who. A skilful GM could make the cat disease a frightening experience. It leaves the character completely helpless as their body is high-jacked by fluffiness. I'd be tempted to drive that home by meowing loudly whenever that player tried to talk. It depends on who is playing though.


There are plenty of unsettling effects throughout the House and a great horror staple of a monster who harasses the party with hit and run attacks from random hiding places all over the mansion until killed. The 1970s classic horror movie qualities of the Sackcloth Boy should satisfy the expectations of the horror true-fans in your group.


The tables are useful for developing the House but they could be used to flesh out any similar haunted house type adventure. Since the die drop table uses room names as well as numbers that correspond to the map you could use it to quickly populate any mansion, manse or manor with the macabre. Kiel also includes unnumbered floor plans of the house at the end of the PDF in case you want to do exactly that. We have a fully realised adventure and excellent example of how to use all the tools with the Hell House Beckons, but the tool kit included allows you to quickly make up your own haunted house with ease. This adventure could be used as is, cannibalized for parts (yum!), used as a design tool, or simply mined for ideas on how to run ghosts. I think I'll run it as is with 5e, and then use it as inspiration for adventures built around the haunting of a single ghost with Lamentations of the Flame Princess. If you are going to use this adventure with an older edition or a retro-clone you might want to adjust the hit points. Everything has a pile of hit points which is again, pretty consistent with 5e play.


The layout of this adventure is solid; two columns with a fair amount of white space. The tables are easy to use and read. Small uses of red are effective in creating emphasis or controlling how you move your eyes through the document. Neither too much nor too little, the use of red is just right. The whole PDF is also hyper-linked for efficiency so you can use it on some kind of electronic device at the table (with the apparent exception of my Chromebook - computer nerds who feel the need are welcome to tell me it's because the Chomebook is linux based or I'm not using the right ap or whatever in the comments below). The cartography is clean, easy to understand and well thought out.

I would be remiss if I didn't say anything about the art. Anyone familiar with Kiel's blog/RPG Tumblr page Dungeons and Donuts will recognize Kiel's whimsical art. In the Hell House Beckons, the art conveys the character of the NPCs and the horror of the situations while remaining in his personal style. This weird mix works for me because it only adds to the creepiness of the whole thing, but I'm already a fan. The occasional use of heavy blacks conveys a sense of the tone but may drain your printer's ink cartridge. I also like the use of red in specific places, especially with the Pale Artist.

Had I'd paid the $9.99 USD for the PDF, I'd be happy with the purchase. There's a lot that can be used in the Hell House Beckons. It's obvious that Kiel put a great deal of effort into this adventure. I admire his ambition to change how ghost like creatures (ghosts, spectres, etc) are used in D20 RPGs. He created some good tools to do exactly that.

If you want a good ghost story for your table, check out the Hell House Beckons from Kiel Chenier!