A while back James Raggi of Lamentations of the Flame Princess fame put a call out for magic items that fit the particular feel of the LotFP universe. Most of them were rejected for one reason or another and people are posting them to the web under the tag #raggisrejects

The following is my reject, Birtwhistle's Portal of Temporal Convenience: 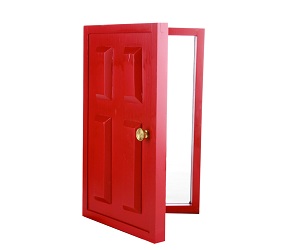 This door appears to be of ordinary size and made of a hard, red wood. Whether the red is its natural colour or it is stained that way is a mystery. Tiny, shallow carvings of arcane symbols cover both facings of the door and seem to swirl around the ornate, silver doorknob.

If this door is placed in a doorway it will swell or shrink to fit the door frame within 1d12 rounds. Once it fits the door its silver hinges will attach themselves to the door jamb within another 1d6 rounds unless someone takes action to do it themselves first. Once the door is hanging and closed the magic activates.

Opening the door converts the room beyond into a temporal anomaly. Anyone entering the room before it is closed will share the same time travel experience and be able to perceive each other. If the door is closed and opened again subsequent people entering the room will see the room as empty and have a different time travel experience requiring its own roll. The door remains for 8 hours after the first time someone uses it to enter the room and then disappears until the occupants exit the room.

To use the Portal of Temporal Convenience a person needs only to open the door, enter the room beyond and close the door. Once inside the person must remain there for 8 hours (the same as the door remains). If anyone opens the door and leaves before the allotted time has passed within the room, they will exit at the same moment they enter. The collision of two versions of the same person will cause a paradox, resulting in a catastrophic implosion sucking everything within the blast radius out of time and existence. To find the blast radius simply multiply the height, width and depth of the room to which the door leads.

If the occupant or occupants of the room remain there for at least eight hours before leaving roll a D30. The result is the number of days forward in time they have travelled. If a one is rolled the Referee must roll 1D6, two D12s, Percentile Dice (D100) and another D30. The D6 indicates the direction in time the party moves: 1 or 2 indicates they will go backward in time and a 3 through 6 indicates they move forward through time. The D12s indicate the month of the year the party arrives in. Choose the result on the die that is closest to the spring. The result of the Percentile Dice indicates how many years the party has travelled. The D30 indicates which day of the month they arrive.

If the door is removed from the outside during the 1D6 hours it exists after the party enters or it is removed by someone else who has used it for a temporal experience that ends before the party inside, the door simply will not open for the remaining party. They can try to exit the room through another door or window but that will result in the same mishap as rolling a one on the D30. The magic of the door makes the doorway safe. Travelling through an untreated portal is dangerous. Any person doing so will take 1D6 damage for every 10 years or part thereof travelled. The only advantage is another portal can be used as an exit before the eight hours has elapsed with no chance of a time paradox implosion.


Edgar Birtwhistle was a wizard whose hatred of winter was only matched by his disgust with travel and foreigners. To solve his problem he spent decades researching and experimenting with forbidden magics and time manipulation before finally creating his Portal of Temporal Convenience. Exactly when the door was created and even when Birtwhistle lived is a mystery as his life is scattered throughout three different centuries. It is believed he lost possession of the door and disappeared out of time when it was removed from its frame by a disgruntled apprentice sometime in the 16th century. The current physical and temporal location of Birtwhistle’s Portal of Temporal Convenience is unknown.
Posted by David Rollins at 19:00