Retro-Speculative: D6 Star Wars, What Is It Good For?

West End Games' D6 Star Wars is by far my favourite version of the game. It did exactly what it said on the tin. It gave our group a cinematic gaming experience in the Star Wars universe. Granted, the first game was a lot of roleplaying into situations where we could use quotes from the movies, but after that we had some grand adventures as part of the Rebellion.

A couple of things have pulled me back to my shelf to have a look at my well-worn Star Wars RPG books. I've seen the WEG D6 System attached to a few projects for RPGs based on different intellectual properties lately. I wondered at the choice of this open system instead of the others out there? And why not design a new system? All these questions had me itching to take these down and read through them again, but there's only so much time in the day. Then I saw the pilot for the new Rebels animated series and started wondering how the game holds up and if it might be worth running some old Star Wars? 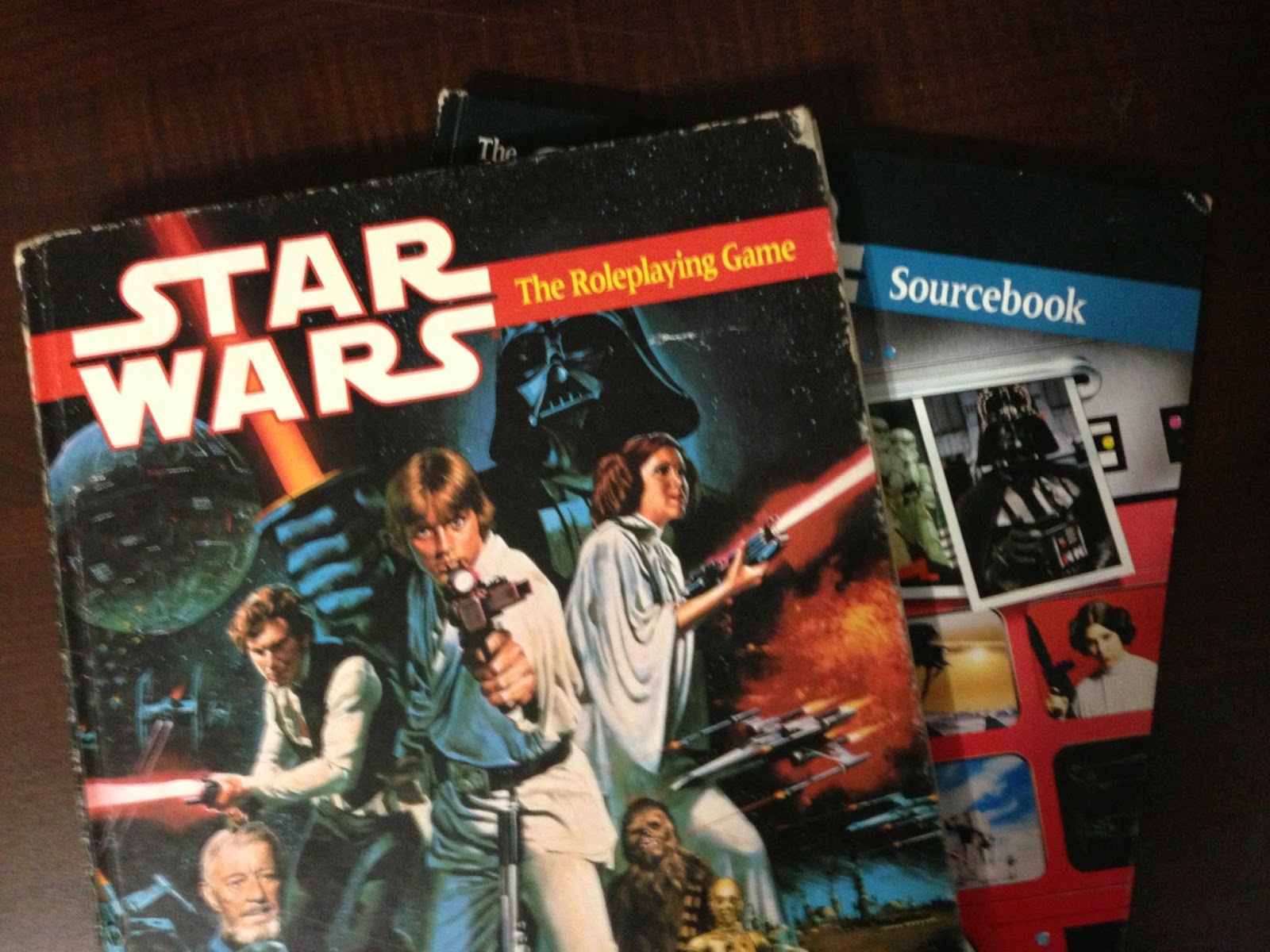 I think the last time I played Star Wars was in the late 1990s. Reading through it now is extraordinary! Not only does the game hold up for Star Wars, but it just might be the best Sword and Sorcery RPG ever written. 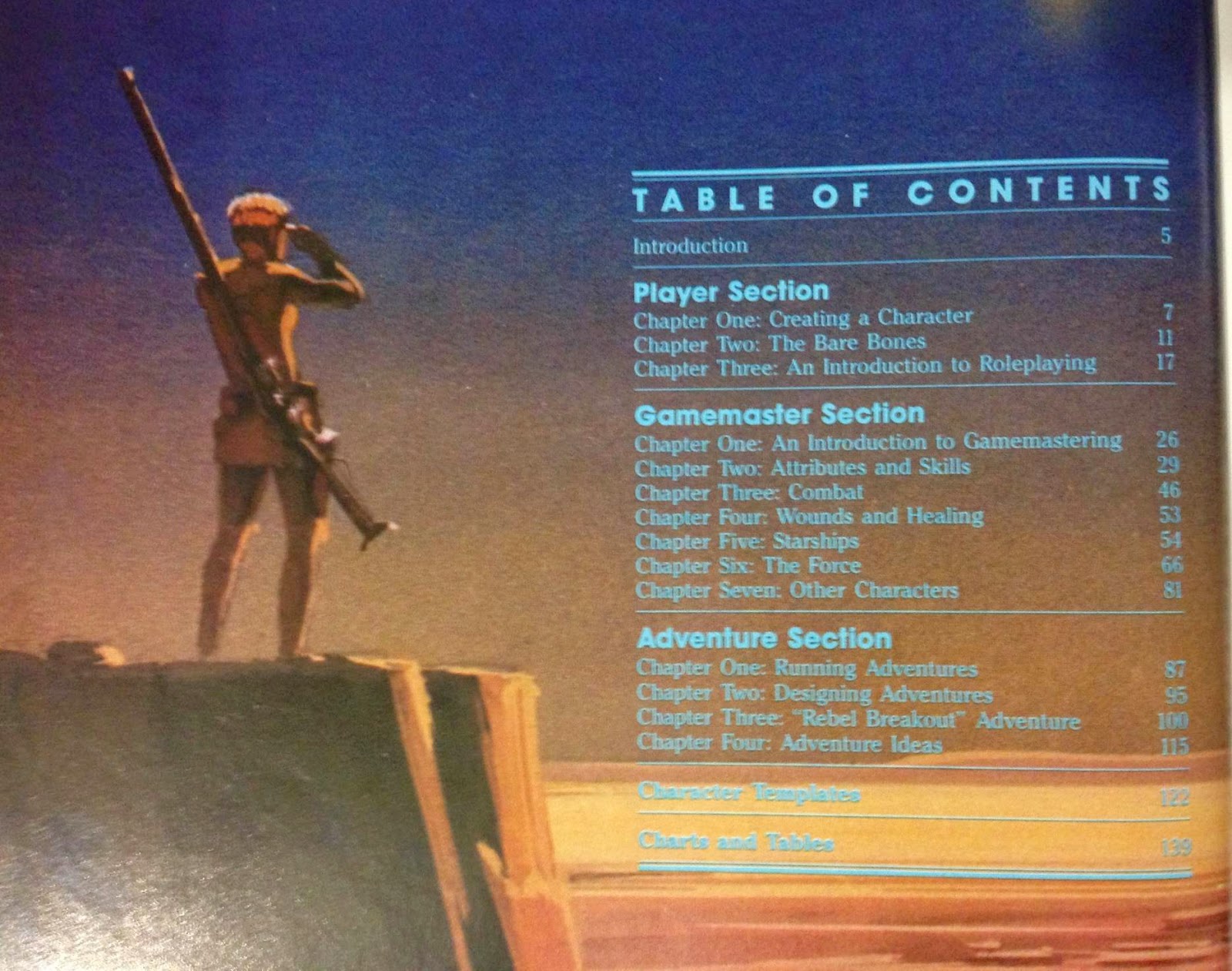 The game is beautiful in its simplicity. The majority of the rules are in the first 24 pages! The pulpy action this RPG emulates is the same pulpy action George Lucas was copying from the wild adventures of speculative fiction from the early 20th Century. With these things in mind it should hardly be a surprise that there is so little adjustment needed to bring the game full circle and use it to run a Sword and Sorcery game.

I'm a different person now than I was when I first encountered this game. It didn't occur to me back then that you could reskin a "sci-fi" game for another genre. I hadn't read the same breadth of material in the Sword and Sorcery genre that I have now either. This time I had all that and a pile of extra RPG hacking experience riding my shoulder and whispering in my ear while I turned the pages.

For those of you unfamiliar with the game, character creation uses templates of different character archetypes. It works because it takes a player minutes to customize the template to fit their own preferences for play but still gives a wide variety of choice with the 30 odd templates in the core rules. Each template comes with a description. You get basic equipment and starting money. There's also a typical background, personality, a quote to show the flavour and a possible connection to the other players. Any of these can be changed, but they are a great starting point. After that the player only needs to pick name, write a physical description and assign seven dice to the skills. 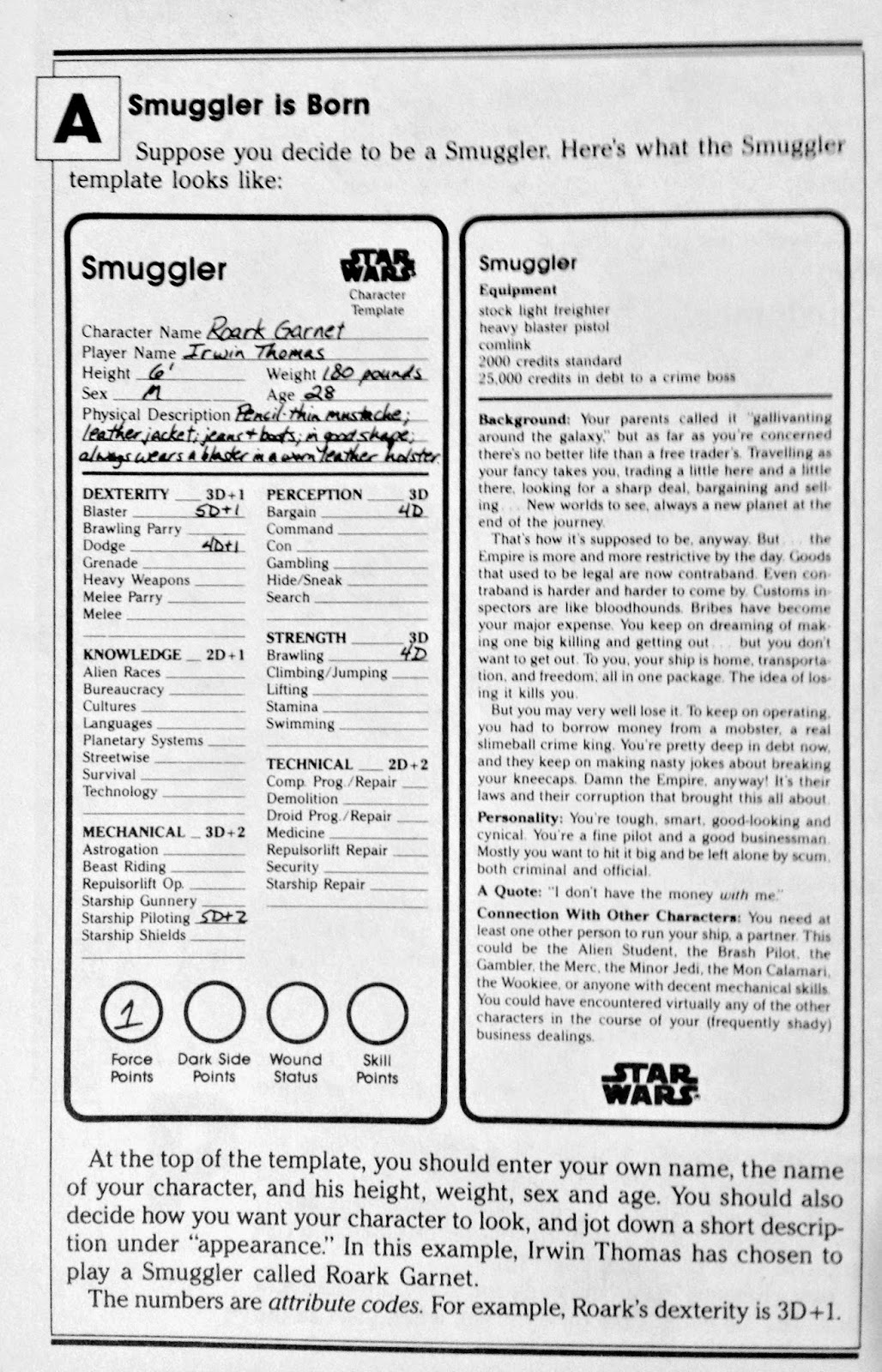 The templates are where the majority of the work of conversion is going to come from but it's a fast way to deliver setting information without cramming it down the players' throats. Players are not going to read your world setting document but they will definitely read the descriptions of all the character classes (at least until they find one they like).

The skills need to change.

It's fairly easy to switch out the sci-fi references like "blasters" and "planetary systems" to something more appropriate like "bows" and "lands and kingdoms." The technical skill under Knowledge could be swapped out for Arcana or Magic.

The Technical section has to go. It could be renamed Arcana and could include things like rituals, ancient technology, magical creatures, the old ones, wards and sigils, etc. Medicine could stay in this section since effective medicine relies on knowledge typically gained from cutting up cadavers. Something which is often frowned on.

That leaves the Force.

Things like Force Points can easily be reskinned as Fate Points. Heroes are often fated for great deeds so it fits the sword and sorcery genre. The Dark Side works well with S&S too. When a character commits some heinous act of evil, dark forces take notice. This interest is represented by the Dark Fate Points. Instead of rolling to lose the character because it turns, you could roll for a dark gift and have a table of hideous mutations. As soon as the character mutates the Dark Fate Points are set back to zero as the nameless extradimensional entity or ancient intelligence moves on to other pursuits. The sorcerers would be able to make use of the Dark Fate Points when casting just like Jedi do, but the fluctuation and the stream of mutations would make evil sorcerers unpredictable and grotesque.

Magic can pretty much stay as it is. The force powers Control, Sense and Alter are wonderful, low-magic ways to express magical ability. Call them magical disciplines and you are good to go. The list of force powers in the book make a fine starting point for common spells. You could also have powerful summoning rituals for terrible creatures and spirits with all sorts of requirements as part of the magic system that would make great seeds for adventures.

It's starting to come together, but we have all these space-opera templates. A Pirate is a Pirate in any genre but it might be harder for the others. Let's take a look at the first three: Alien Student of the Force, Arrogant Noble and Armchair Historian. 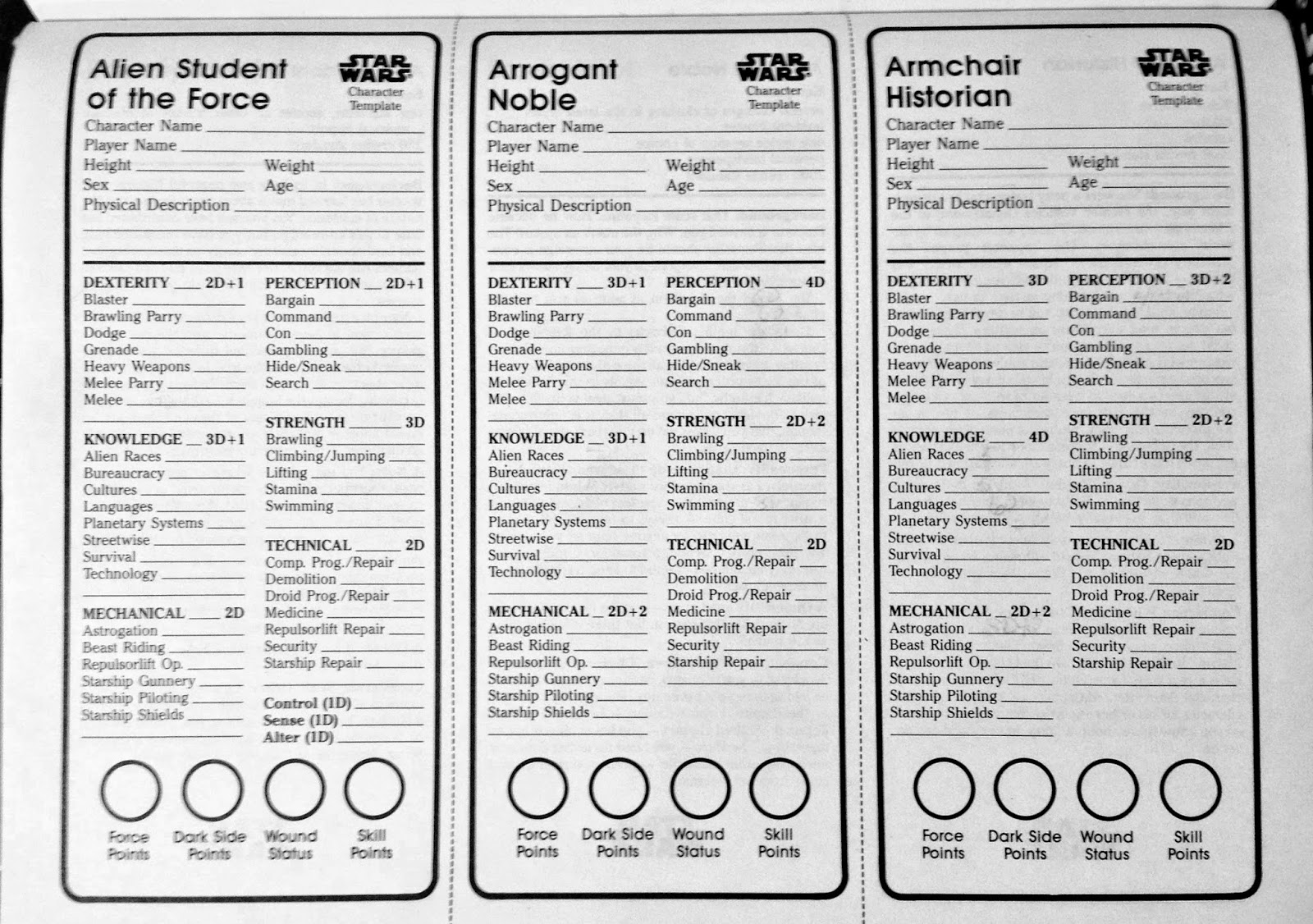 The Arrogant Noble is another easy one. There are arrogant nobles everywhere and it looks like the skills can all stay where they are. No problem. The Alien Student of the Force could be a Mysterious Foreign Sorcerer. I would probably drop the Strength down to 2D and bump "Arcana" up to 3D as well. The Armchair Historian presents something of a problem since it doesn't fit the new genre. Looking at the stats though we could easily reskin this one as an Indiana-Jones-style Relic Hunter. 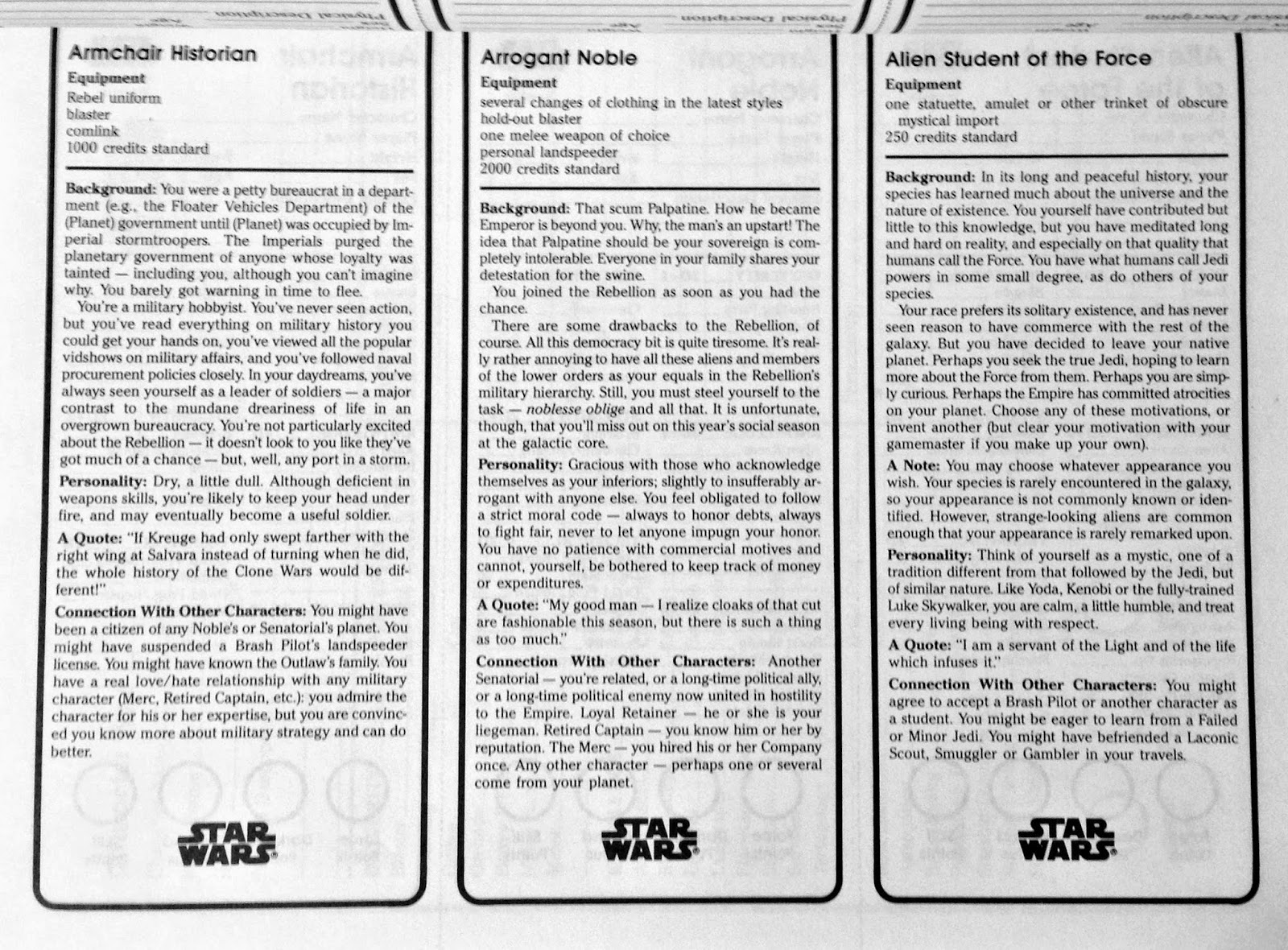 The text on the back would need to change to match the setting. The short list of equipment fits Sword and Sorcery well but it would need to be altered to work in the setting (no blasters for you!). The credits could just be removed or turned into coins after a couple of zeros are knocked of the total. The backstory for the Arrogant Noble fits multiple genres. There's not much work to do here. The Alien Student of the Force needs a major rewrite but the focus of the character is still to seek magical knowledge in a place far from home. That is likely going to take the background text in a similar direction. The Armchair Historian is a total rewrite, but since we are using a well known character as a reference for our tomb-robbing Relic Hunter the text should come easy. Just think, "What would Indy do?"

I'm liking this reskin better than my other options for sword and sorcery. It's more simple than ZeFRS(TSR Conan) and more robust than Barbarians of Lemuria. As much as I love the other options I may dig into this sometime over the next few months.

Maybe I'll return to this one with some developed templates and that random table of mutations.