I posted an image last November of the notebook I was using to write down the details of my RPG. By putting it out there on G+ I was making a promise to myself to finish it. November is as good a month as any and better than some for getting back on it. 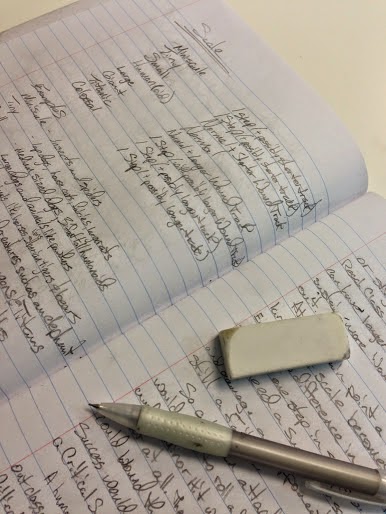 November is a popular month for writing or at least starting a novel. A few years ago the creative action spilled over into game design and we got the National Game Design Month or NaGaDeMon. Last year I jumped in knowing I wouldn't be able to finish because I'm busy this time of year but hoping the momentum of a month-long press would get me far enough along to that I'd be able to finish eventually. That worked for a while and it looked like I was going to have a first draft ready by January. Then my life exploded in December and I dropped the game along with pretty much everything else. 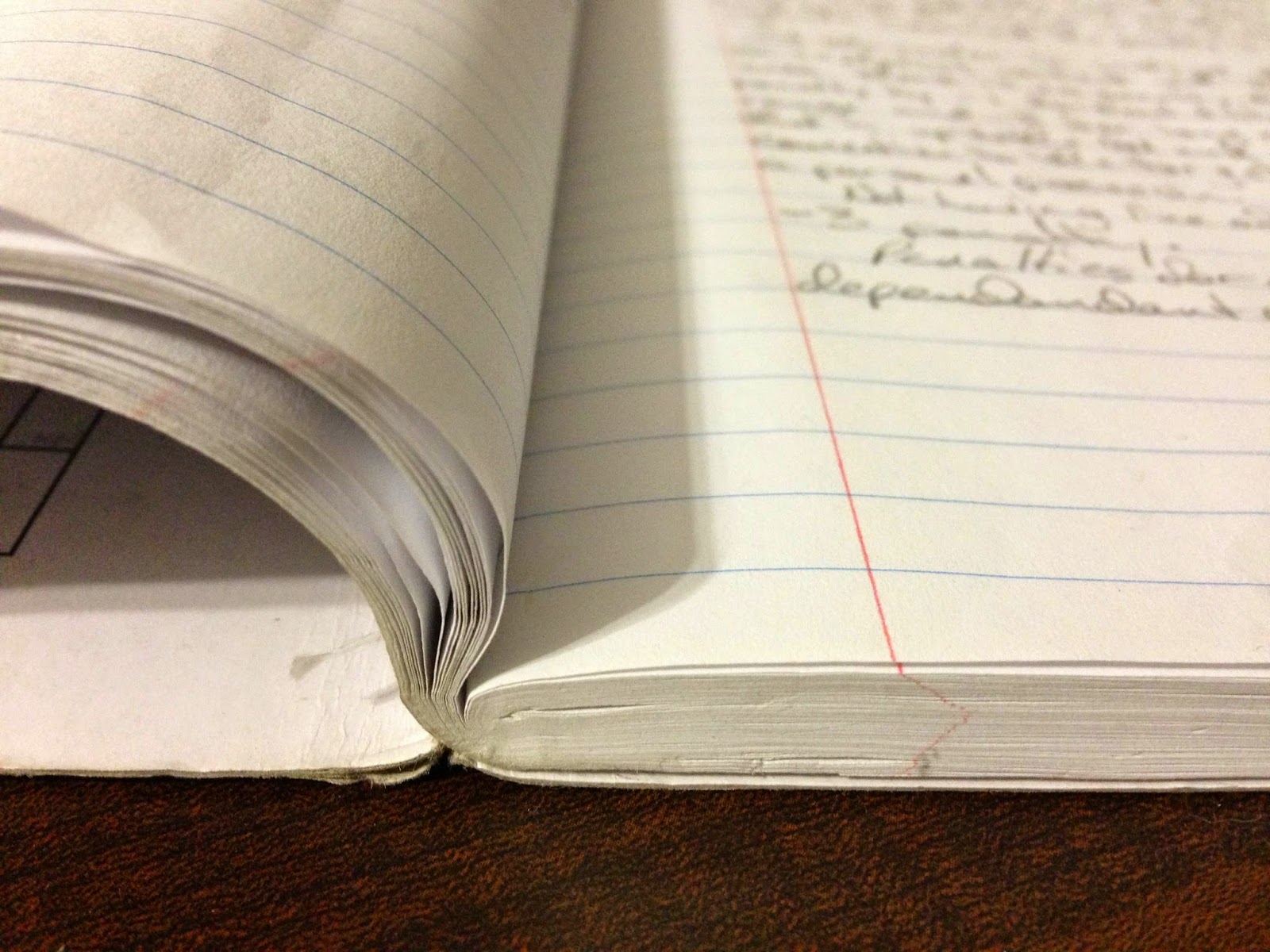 By the spring I was almost back to normal and I started working on the game again. I started carrying the composition notebook that still said "NaGaDeMon 2013" on the cover with me everywhere and working on it when I could. I had a system where I would write large ideas that were fairly well organised in my head on the right hand pages and use the "backs" or left hand pages for shorter ideas that just came to me as I was going. Trouble started when I found myself writing on the left-hand pages as much as the right-hand ones as the game came too quickly put down neatly into one notebook. I solved that problem with the chromebook I got for my birthday which wasn't much larger than the composition notebook but allowed my to work on multiple sections at once. It was slow going though since summer is my busy season. Which brings me back to now. It's a year later and the game that has percolated in my head, changed and grown basically the entire time I have played RPGs is now so very close to being a playable thing that I could share with the world instead of merely a collection of ideas and experiences that inform my play and GM style.

Over the course of the month I'll be sharing bits of the game I have already and more as I write them. Feel free to comment on anything you like, don't like, or think could be better with a change. I'll be continuing with posts on other topics as well so if my game isn't your bag I'll still have content you might be interested in.

So what is this game I'm talking about? Why bother when there are so many games out there? I have a half-finished blog post on the go that mentions there are so many systems out there you probably don't need to reinvent the wheel to get what you want so what makes me think what I have here is worthwhile or remotely necessary?

I've always liked fast play. In recent years, the rules-light games with little in the way of rules to slow down the fun are my favourites. I've been playing since the early 80s and I started with those early rules-light games, then moved to newer, more complicated games but the wild speed of the retro clones and some of the new games are the ones that have me now. It could be that I'm old and my life is complicated enough that I don't want to spend time with the rules any more. I just want to play. Maybe I'm just lazy.

There are other games that come close to what I want but don't quite hit it. I like a possibility curve because it allows skill and talent to shine in an opposed encounter. I like a single die mechanic because the question "What dice do I use for that?" slows down the game for no good reason. I like six-sided dice because there's no barrier to entry since people can usually get (or even make) a set of normal dice without any trouble anywhere in the world. I like having a simple framework of rules to allow a GM to give a fair and consistent difficulty for the roll so players can try any action without consulting the rule book. I like to do things in the game and rolling dice is a fun part of that, but I like games with a single roll to determine both success and the amount of success. If I roll well to hit something it should do a lot of damage or something awesome. Two rolls are a hassle and can give silly results. There's nothing out there that has all of that and emphasizes the kind of play I love.

Enter the 3D System. It uses 3, ordinary six-sided dice rolling on a simple resolution table. One roll gives not only success but also the degree of success. It depends on the GM being fair and applying the rules consistently but gives a lot of leeway for players who come up with wild schemes on the fly. 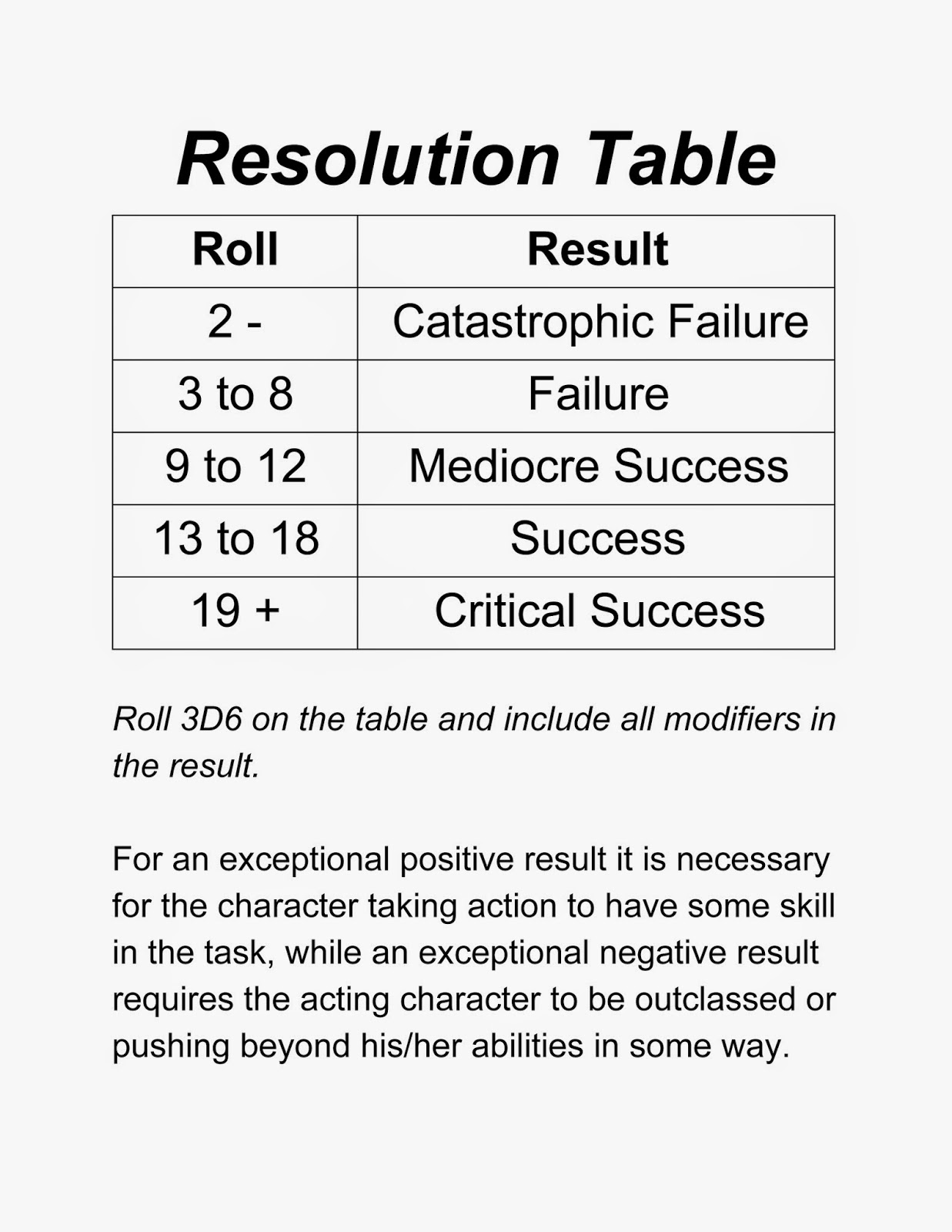 Mediocrity is the most likely result unless some exceptional circumstances come into play. It's not hard to succeed, but it is difficult to excel. In combat that means minor hits are more likely than a decisive, fight-ending hit. When rolling to do other things it means you can get by but won't be able to get a grand effect without some talent or a mismatched contest coming into play. I'll expand on that in another post. This time around it's just the basics.

My game design process is all about boiling it down. I originally started with 15 different attributes. As I ran it through different scenarios in alpha testing I would often find that two attributes are equally relevant to the roll. Every time that happened I combined the two. Eventually I ended up with only four attributes to differentiate one character or creature from another: Acumen, Physical, Social and Will. When I moved from hard copy to e-documents these became: Acumen, Body, Charm and Determination. I think the ABCD will look cool on a character sheet and make it easy to remember. 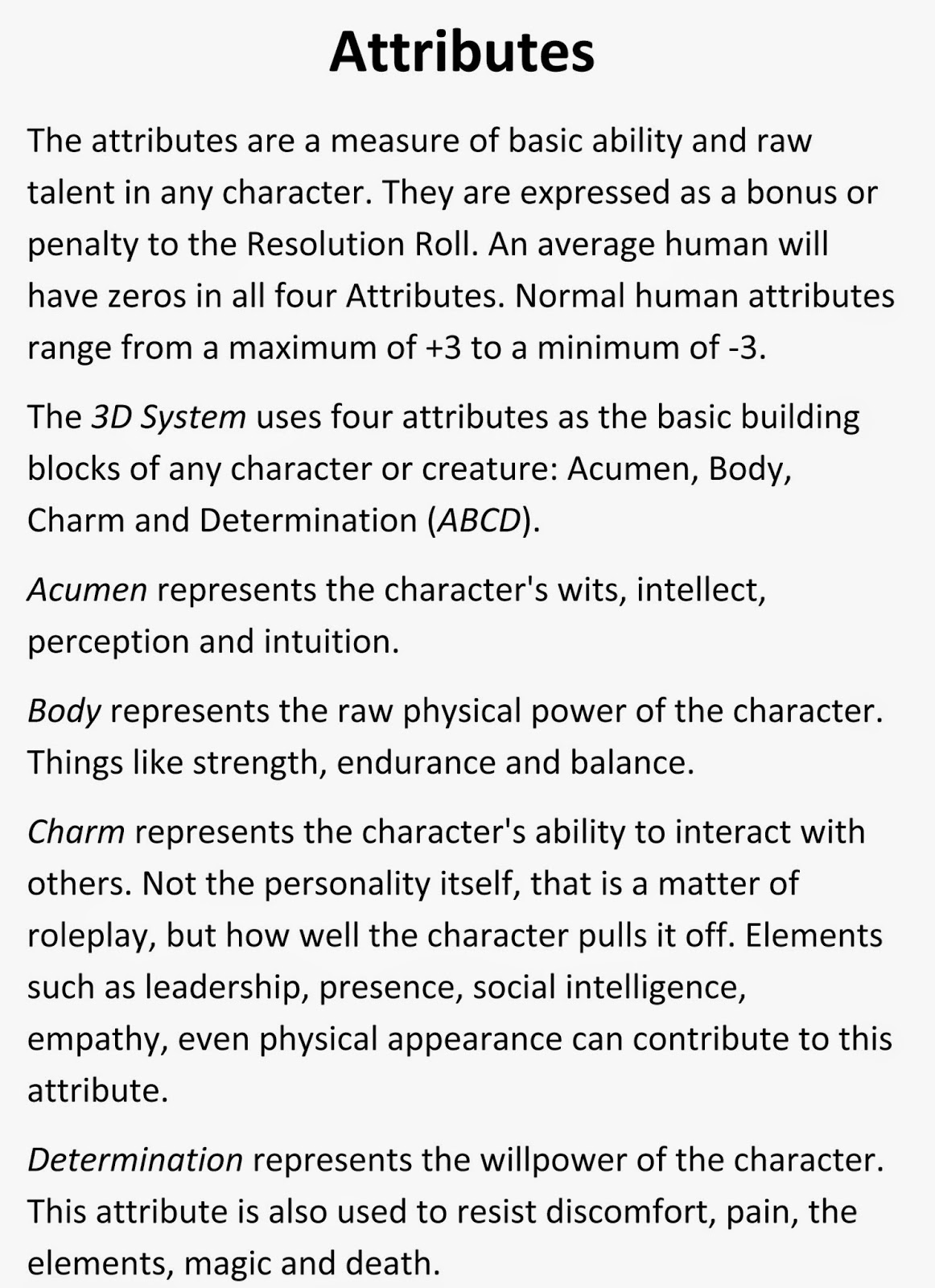 For the skill section I had a similar epiphany of simplification. I started off with with skill groups kind of like what you would see in ZeFRS where expertise in one skill gives a basic ability in related skills. This seemed a little unwieldy for playtesing so I came up with a simplification that I may end up using long term because it speeds up character generation in huge way!

What I'm working on right now is character generation. I'm creating a flow that will allow PCs to grow out of handful of rolls or choices so players can be ready to go in ten or twenty minutes. I'm going with the simplified skills for now. Even if I return to the more detailed skill groups I may keep the simple method as a basic version of the game. I'll test them both out and see.

Once I have some character generation documents and the rough draft of the magic system I can playtest with me as the GM to see how it all feels in play. Once the initial bugs are out I'll be able to put together a more complete rules document and maybe a couple of sample adventures or conversion notes for existing adventures so I can see how it works for another GM. 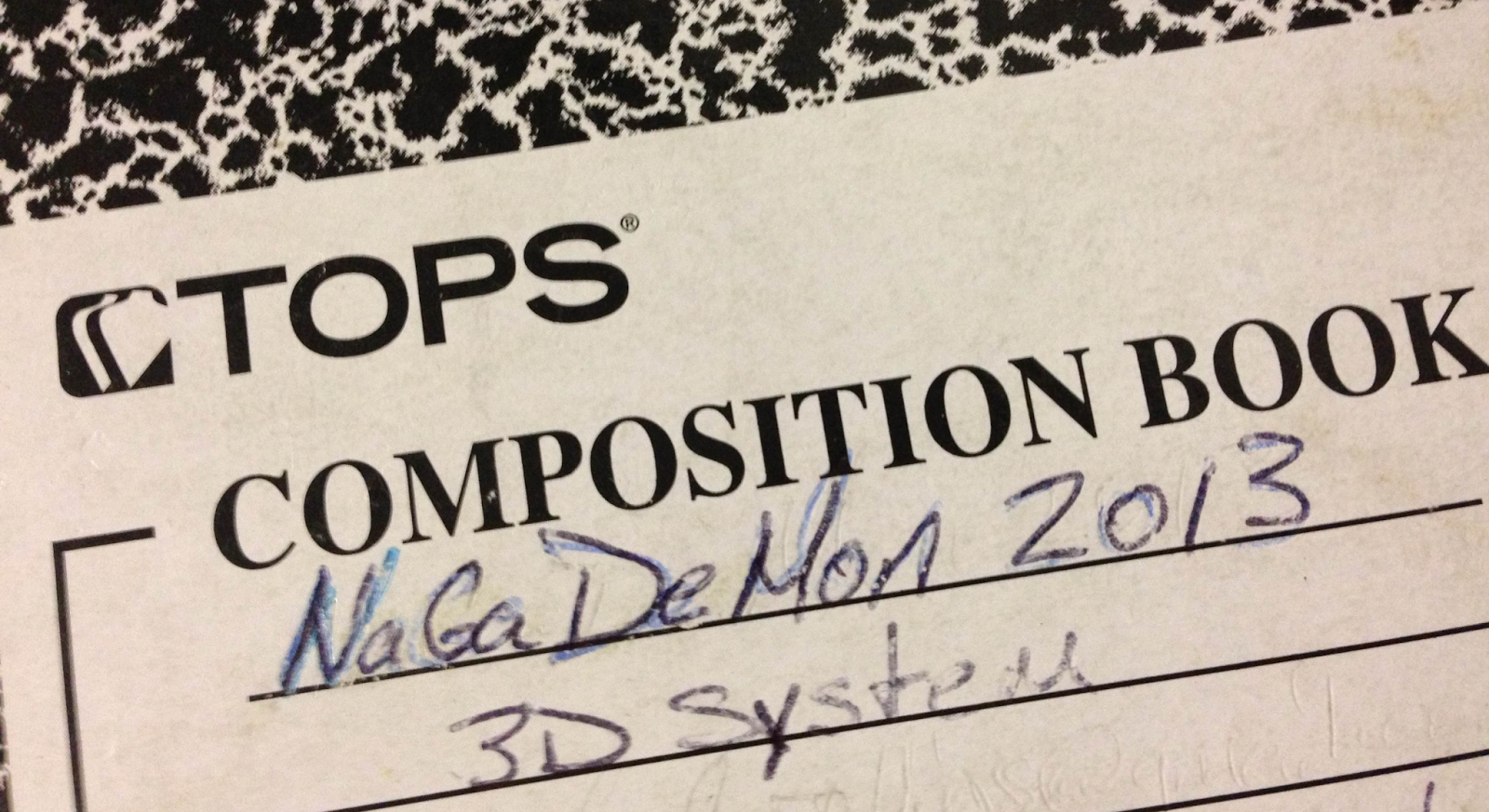 So here it is, the beginning/continuation of my #NaGaDeMon adventure! Here's to another big push for my own personal fantasy heart-breaker! Hopefully this year I keep the promise to myself to finish it.